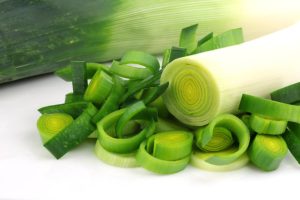 The most esteemed member of the onion family is the leek.

The flavor and fragrance of leeks are more subtle, more delicate and sweeter than onions

The ancient Egyptians held leeks in high esteem as did the ancient Romans, who considered leeks superior to both onions and garlic.

The leek is essential to many fine dishes—the popular cold soup vichyssoise—which has been made in France for centuries, the Scottish cock-a-leekie, and stews such as the French pot-au-feu.

You can find leeks at the farm market year round, but their peak season is October through May.

The leek looks like a giant scallion with a thick white stalk that is cylindrical in shape and has a slightly bulbous root end. It can grow from 18 to 36 inches (45-90 cm) tall and the bulb is usually at least 1 inch (2.5 cm) in diameter.

The tender part of the leek is the lower portion of the stalk—which is white and grows underground or is blanched white after being set in trenches or mounded during the growing process.

The leaves are broad, flat, dark green and wrapped tightly around each other much like a rolled newspaper.

Choose. Select leeks that are straight, firm and intact with crisp, upright, brightly colored leaves and that have unblemished white portions. Avoid leeks with withered, limp or yellow spotted leaves or those that have cracked or overly swollen bulbs. The smaller the leek the tenderer it will be.

The white section and about 2 inches (5 cm) of the pale green portion are the desirable parts for cooking. If you bend the lower part of the pale section, it should give a little. If it doesn’t give, the leek has a woody heart that won’t soften during cooking. 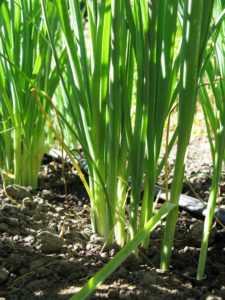 Store. Leeks will keep in a plastic bag in the refrigerator for 3 to 5 days. Wrap them in a damp towel in an open plastic bag. They will keep for only 2 days after cooking, and they do not freeze well.

Prepare. Slit the leek from the top to the bottom lengthwise keeping the root intact and wash thoroughly to remove all dirt trapped between the leaf layers or soak leeks for 10 minutes in cold, salty water to destroy insects that might be hiding between the leaves. Rinse them gently to remove any dirt. Trim rootlets and leaf ends before using.

Cook. Leeks can be prepared much the same way as asparagus. They can be used in stocks, soups, stews, and poached or steamed. They should not be overcooked or they will become slippery and slimy

Nutrition. Leeks are a good source of folic acid and a good source of iron and potassium. They also supply vitamin C, vitamin B6, magnesium, calcium, and copper. Leeks are low in calories and rich in vitamin A. If you have trouble digesting onions, leeks may be a good alternative.

Leeks facts and trivia. Leeks have been in cultivation since at least 300 BC and are thought to be native to the region stretching from Israel on the Mediterranean Sea to India and Central Asia. It is thought that ancient Phoenician traders introduced leeks to Britain and to the Celts and Welsh. (Leac was the Saxon term for any kind of onion or garlic (gar-leac).

Today, the leek is the national vegetable of Wales. The leading producers of leeks are France, Belgium and the Netherlands.

The botanical name of the leek is Allium porrum.