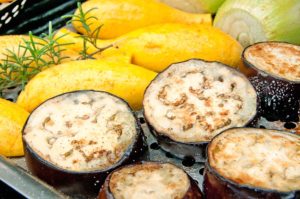 The mild flavor and light, spongy texture of the eggplant make it a good match for other vegetables, browned and chopped meat, cooked fish or shellfish.

The eggplant can be sliced and simmered, sautéed or stir-fried, pan-fried, deep-fried, baked or boiled, and broiled and grilled.

One small or medium-size eggplant split lengthwise will make two shells perfect for stuffing as its own casserole dish. Just mix the flesh of the eggplant together with bread crumbs, stuff the shells, and bake.

Locally grown eggplants will be at your farm market in mid- to late summer, August through September in the Northern Hemisphere.

The classic Western eggplant is cylindrical- or pear-shaped with a smooth, glossy, deep purple skin and a green calyx or stem cap. But the eggplant—which is botanically speaking a berry, not a vegetable—can assume many shapes and colors.

Besides the Western eggplant, other purple eggplants include the Japanese eggplant and the Chinese eggplant—both of which are very slender and barely cylindrical.

In Thailand, small, round eggplants are pale green with white and bright orange stripes. The ‘Turkish Orange’ eggplant looks more like a tomato than an eggplant, and the ‘Red Ruffled’ eggplant also looks much like a small tomato.

The white eggplant—which is often used for pickling and is thought to have originated in India—is the same size and shape as an egg with a skin that is firm and smooth. No doubt, the white eggplant is how the eggplant got its name.

If you live in Great Britain or France or in many other parts of the world, you know the eggplant by the name “aubergine”.

The eggplant is an herbaceous perennial usually grown as an annual. It has large, lobed, velvety gray leaves that are 4 to 5 inches (10-12 cm) long. Classic pear-shaped eggplant berries can range from 5 to 12 inches (13-30 cm) long. Other varieties with white, green, yellow, or mottled green fruits are smaller. The flesh of the eggplant is greenish white to white. Each plant usually produces 3 to 4 well-developed fruits which in some varieties can weigh up to 2 pounds (0.75 kg) or more each. Only the fruit of the eggplant is edible, all other parts are poisonous.

The skin of a young eggplant is edible but toughens with age. The flesh of classic Western eggplants has more moisture and is more bitter than that of the Asian varieties. To draw off the eggplant’s bitter juices, western eggplants are often salted before cooking. Asian eggplant varieties are not bitter and do not require salting.

Choose. Select eggplants that are shiny, firm, and heavy for their size. The full-colored purple eggplant will take on a dull greenish-bronze color when it becomes overripe. A mature eggplant will be soft enough that thumb pressure will leave an indentation in the flesh of the fruit.

Avoid eggplants that are bruised or have wrinkled skin. Overgrown eggplant will become soft and spongy and will be bitter tasting.

Store. Eggplant will keep for up to four days in the refrigerator crisper inside a plastic bag. The eggplant will shrivel as it ages.

Prepare. Young eggplant does not need to be peeled. It can be washed and the ends trimmed before cooking.

Western eggplant varieties may require salting to remove bitter juices before cooking. Trim the stem end; cut the eggplant into slices about ¼ inch (¾ cm) wide; peel or discard the end slices; soak in cold salted water for 30 minutes or until the eggplant releases brown juice; drain and proceed with the recipe. As an alternative, salt the slices and place them between sheets of paper towels, weigh them down with a heavy plate, and let sit for one hour.

Eggplant easily soaks up cooking oils so it is best to coat eggplant slices with flour, batter, or crumbs before cooking to inhibit fat absorption.

Serve. Eggplant has a mild flavor somewhat similar to fried oysters. Eggplant can be:

Eggplant facts and trivia.  The word aubergine traces the eggplant’s travels from its native India to Europe. Aubergine is derived from the Sanskrit word for the eggplant: vatin gana. Vatin gana became badingen in Persian when the eggplant was introduced to the Near East. Badingen became al-badingen in Arabic as the plant traveled further west, and when the Moorish invaders introduced the eggplant to Spain in the sixteenth century al-badingen became alberginia in Catalan Spanish. Aubergine is a corruption of al-badingan and albadingena.

The first eggplants to reach Europe were white and egg-shaped. The eggplant originated in India but was first cultivated in China in the fifth century B.C. The small egg-like eggplant is still popular in Spain today and is often pickled.

The botanical name for eggplant is Solanum melongena. A related plant is S. integrifolium which is sometimes called tomato-fruited eggplant or gilos. This plant is cultivated in Asia and Africa and bears red- and orange-fruited eggplants rarely exceeding 2 inches (5 cm) in diameter.

The eggplant is botanically a berry. In botany, a berry is a simple fleshy fruit in which the entire ovary wall ripens around the seed and is edible. Examples of other botanical berries include the tomato, grape, avocado, persimmon, guava, and chile pepper.