Join our gardening family to receive the latest tips. Subscribe
Grapefruit red half1 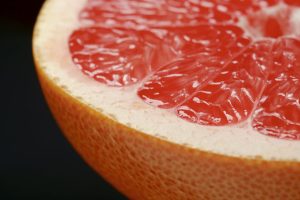 Grapefruits in general are dived into natural types: there are common white or yellow-fleshed grapefruits, and there are pigmented or pale pink to ruby red grapefruits. There are also seeded and seedless grapefruits. Beyond flesh color and seeds, you can generally say that seeded grapefruits are more flavorful than seedless.

Grapefruits have a sharper flavor than oranges. The heat a grapefruit grows in has much to do with how long it takes to reach maturity and ripeness and can affect the sweet-tartness of the fruit. In hot regions, the grapefruit can mature in as few as six to seven months. Grapefruit grown in costal areas can take as long as 18 months to ripen. Costal grown grapefruit will taste more tart and have a thicker rind.

Grapefruits—which can measure anywhere from 4½-11 inches (11-17 cm) in diameter–come to market at different times of the year. If you look at a weather map, you can pretty much figure out where the grapefruit at your market is coming from by following the daily average temperatures for a week or so. In the United States, Florida and Texas grapefruits are in the market from October through June, and California and Arizona grapefruits are in the market from February through November.

Choose. A grapefruit should be heavy for its size (which means more juice), quite firm, with a fine-textured, tight, shiny skin. Seeded grapefruits are said to have the best flavor and are easier to separate into segments. To the touch, a grapefruit should be springy; avoid fruits that are overly soft. The more blush of pink or red on the skin, the deeper the color of the flesh.

Store. A grapefruit will keep for up to two weeks when stored loose in the refrigerator. Don’t leave a grapefruit at room temperature for more than a day or two.

Serve. The grapefruit can be served fresh, halved or segmented as a breakfast fruit with a sprinkling of sugar. It can also be added to green salads, fruit salads or served with cheesecakes, flans or sorbets.

Grapefruits are easier to eat if the segments are first loosened with a curved grapefruit knife or serrated spoon. When segments of citrus are separated from the membranes holding them together, they are referred to by some cooks as supremes.

Grapefruit can also be grilled and served with duck, chicken, pork or shrimp.

Kitchen tip. Grapefruits are more difficult to peel than oranges. If you want to remove the white pith easily, drop the whole grapefruit in a pot of boiling water. Then remove the pot from the heat and let stand for 3 minutes. Remove the fruit and let it cool. Then peel the grapefruit, and you will see that the pith will easily come off the fruit.

Grapefruit facts and trivia. The first recorded mention of a grapefruit came in 1750 when it was found growing in Barbados—the easternmost island of the West Indies.

Yearly temperatures average 79ºF (26ºC) in Barbados. That tells you something about what it takes to grow a grapefruit—which is thought to have gotten its start as a cross between a sweet orange and a pummelo, also called pomelo.

Grapefruits grow best in places like Florida, South Texas, Southern California, Arizona, Israel, Argentina and South Africa. In climates similar to its native region, a grapefruit can ripen in as little as six months. Grown elsewhere, the grapefruit can take a year or even 18 months to ripen.

The grapefruit took its name from the French word for “clusters” which is grappes. Grapefruits grow in grapelike clusters on trees that reach to 30 feet (9 m) tall.

The botanical name for the grapefruit is Citrus x paradisi. 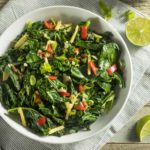 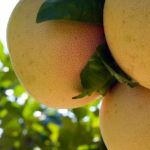