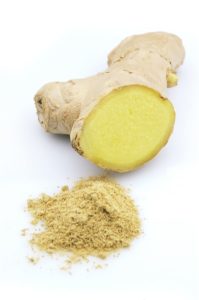 Half spicy and peppery, half lemony, slightly sweet but pungent: that’s how you might describe the flavor of ginger.

Ginger is used as a flavoring for both sweet and savory dishes and is one of the key ingredients in the cookery of China, Japan, Southeast Asia, India, the Caribbean, and North Africa.

Ginger is cultivated throughout the tropics. The leading producers of ginger are India and Jamaica. Ginger is also cultivated in China, Taiwan, Thailand, Nigeria, and Australia.

There are many varieties of ginger in each region of cultivation. Jamaican white ginger and yellow ginger are considered among the best.

Ginger is an herbaceous perennial that grows to 3 feet (90 cm) tall with narrow lance-shaped leaves. The plant’s tan to dark-brown skinned tuberous rhizome–which looks like knobby fingers and is sometimes referred to as “hands”–is used in cooking.

The flesh beneath the ginger root’s skin ranges in color from pale greenish-yellow to ivory. The flesh can be subtle or highly aromatic and pungent. The aroma and flavor of ginger varies according to its region of origin, cultivar, conditions in which grown, and the stage of growth at harvest.

Fresh ginger is available both young and mature.

Ginger is also used dried, powdered, pickled, preserved in syrup, candied, and crystallized. However, if a recipe calls for fresh ginger due not substitute a dried or powdered ginger.

Choose. Select ginger that is young, plump and juicy. As ginger matures, it dries out and becomes woody and stringy. Ginger also becomes more pungent as it matures.

Young ginger is lighter in color than the mature rhizome. Young ginger will have pink tips with sections of the stem still attached.

Young and mature ginger should have firm, smooth skin with a light sheen. Avoid ginger that is shriveled or moldy.

Store. Fresh ginger root can be stored at room temperature for one week and in the refrigerator for up to 3 weeks wrapped in paper towels, pierced foil, or any container that allows it to breath. Wrapped ginger can be frozen for up to 3 months.

Frozen ginger can be peeled and cut without thawing. Slice off a piece of the root and return the rest to the freezer.

Ginger root can be kept for 2 months in the refrigerator if you peel it and put it in a small jar of vodka or dry sherry. The vodka will take on the flavor of the ginger and can be used in stir-fry sauces or marinades. The ginger can be used as you need it.

Serve. Ginger will season both sweet and salty dishes.

Ginger facts and trivia. Ginger originated in southern India where it has been cultivated for at least 3,000 years. Traders brought ginger to Persia in the fifth century B.C. Arab traders took it on to the Mediterranean in the first century A.D.

The Spanish introduced ginger to the New World.

The name ginger is derived from Gingi, near Pondicherry in southern India, where it is thought to have originated. The Latin word for ginger is zingiber; the French is gingibre; Old English is gingiber.

The botanical name for ginger is Zingiber officinale. 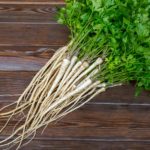 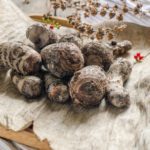