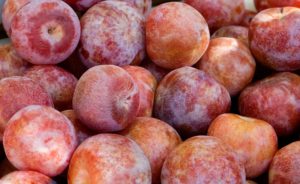 You only need to list a few of the varietal names of pluots—Flavor King, Flavor Queen, Flavor Prince, Flavor Supreme, Flavor Heart, Flavorosa, Flavorella, Flavor Grenade—to understand the most outstanding attribute of these hybrids between plums and apricots. A pluot—which is ¾ plum and ¼ apricot—is all about flavor. It has the flavorful blend of its parents and a higher concentration of sugar.

A pluot’s flavor will explode in your mouth.

Pluots are the late 20th century creation of a California farmer named Floyd Zaiger. Zaiger’s work with pluots–and another apricot-plum hybrid called an aprium–has been built on the foundation of another California fruit breeder, Luther Burbank. One hundred years ago, Burbank, who was the horticultural equivalent of Thomas Edison, introduced more than 100 varieties of plums—including the taste standard the Santa Rosa plum– and his own plum-apricot hybrid called the plumcot.

Plumcots are still around, but the pluot has captured the imagination of a new generation.

Pluots have the same smooth skin as a plum but are generally larger. Like plums their skins and flesh vary from red to purple to dappled to yellow to emerald green. In fact, an exceptionally tasty-sweet variety is name Emerald Queen. From sweet to sweet-tart, you certainly will find a variety that suits your taste.

Ripen. Pluots will ripen at room temperature. When a pluot has ripened its skin will lose its shine. Then it can be refrigerated for up to 5 days.

But the best pluot eating comes when the fruit yields slightly to gentle pressure. That’s how you should pick a pluot at the farm market. Then take it home, wash it gently, slice it in half around the pit, rotate the halves to separate, pop out the pit, and pop the fruit in your mouth.

Just picked pluots, like plums, are available from early summer through the first weeks of late summer. 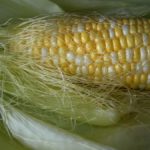 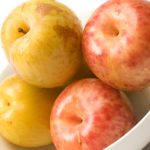