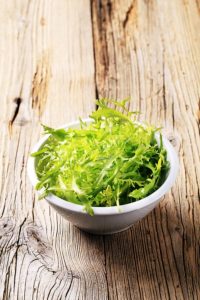 Curly endive and escarole are both chicories of the same species. Their botanical names are the same: Cichorium endiva.

These two slightly bitter tasting leafy greens can be eaten raw in winter or spring salads or added to soups where their tastes become mild.

Curly endive–which is sometimes simply called chicory–is a loose-headed plant. The leaves are light-green in the center graduating to dark-green on the outer leaves. The inner leaves are mild tasting and the outside leaves are slightly bitter.

Escarole—which is also called Batavian endive, batavia, and broad-leafed endive–forms a flattened head. The leaves are creamy yellow in the center graduating to light to dark green on the lightly ruffled edges. Escarole is usually less bitter tasting than curly endive.

Curly endive can have a bit of a prickly texture. It turns somewhat more tough and bitter as the weather warms.

Curly endive that is blanched creamy yellow in color—and usually flattened as the result of blanching with a board or shingle—is marketed as frisée or riccia, the French and Italian names for curly endive.

The hearts of escarole can be eaten raw in green salads. In the spring, you can add mustard and shallots or tomatoes, in the winter, add nuts and raisins.

Escarole is popular in Italian cookery—especially in soups where it is quite mild in flavor after cooking.

The name Batavian endive or batavia for broad-leafed endive refers to an ancient tribe called Batavi which once inhabited what is now Holland. Foods popular in that time and region were referred to as Batavian.

Often, the names endive, escarole, and chicory are used interchangeably.

Choose. Select curly endive and escarole that is brightly colored with crisp, fresh leaves. Avoid leaves that are dry, flabby, or browning.

Store. Curly endive and escarole will keep tightly wrapped in a plastic bag in the refrigerator for up to 3 days.

Prepare. Wash and remove wilted leaves before using; cut out the core; remove the leaves by hand and tear or break them up.

Serve. Curly endive can be served raw with vinaigrette that is flavored with shallots, mustard, or garlic. If the leaves are at all tough or bitter, it is best to serve curly endive cooked in soups or vegetable ragouts.

Escarole can be served raw in salads or it can be sautéed and added to soup.

Sauté escarole in olive oil then serve with raisins and pine nuts.

Nutrition. Curly endive and escarole are rich in vitamin A, and also vitamins B and C. They also contain calcium, phosphorus and iron.