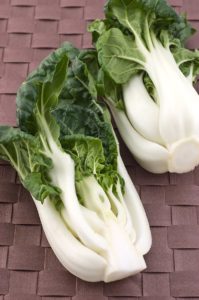 As if the names were not confusing enough, if you look for bok choy at the farm market you may find the same plant in one of its many incarnations: seedling or “baby”, mature, and flowering. Bok choy does not look the same in its differing stages of growth.

To this, you can add various varieties of bok choy: Canton or dwarf bok choy, Shanghai or green-stemmed bok choy, Taiwan or Fengshan bok choy and additional variations known as choy sum, tatsoi, and yau choy.

Bok choy originated in China. “Choy” or “choi” is the romanized word for the Chinese character that means “vegetable.” “Bok” or “pak” means white. Sometimes the word “sum” is added, which means “heart.”

The best way to navigate the world of bok choy is to talk to the growers at the farm market and to try bok choy in as many of its incarnations as you can.

Bok choy has crunchy stalks that are mild and juicy sweet. Its leaves are tender and crisp with a subtle peppery flavor.

Bok choy is a member of the Asian vegetable family that often goes by the generic name Chinese cabbage. But the flavor of bok choy is much more subtle than round-headed cabbage.

Bok choy can be eaten raw in salads, stir-fried, cooked as a vegetable, or marinated.

The stalks of bok choy are smooth and rounded and bear a resemblance to Swiss chard or celery without the grooves and strings. The leaves are large and spoon-shaped like the leaves of chard or spinach.

The stalks or ribs of bok choy are whitish, fleshy, crisp, and mild flavored. Some bok choy varieties are short-ribbed and others have long ribs. Because of the stalks similarity to celery, bok choy is sometimes called celery cabbage.

The leaves of bok choy are green and veined. Bok choy leaves are milder than mustard greens but more biting than Napa cabbage or Chinese leaves.

Bok choy originated in China thousands of years ago. There are dozens of varieties of bok choy. Bok choy was introduced to the West in the nineteenth century.

The bok choy most commonly found in markets is Canton or dwarf bok choy. It is short and squat with plump, pearly-white stalks that are tender, very juicy, and bland tasting. Dwarf bok choy’s leaves are dark green, somewhat curled, looking a bit like the leaves of chard. They have a cabbagey flavor.

“Baby” bok choy is used to describe both the dwarf Canton bok choy and other bok choys picked small and immature.

Either way expect bok choy cooked right to have a light, refreshing taste. Expect overcooked bok choy to be mushy and dull tasting.

Choose. Choose bok choy that is compact, firm, and fresh. The ribs should be without brown spots. Avoid leaves that are even slightly wilted.

Store. Bok choy will keep 2 or 3 days unwashed in a perforated plastic bag in the refrigerator. Bok choy wilts quicker than head cabbage.

Prepare.  Separate the stalks from the base as you would celery, trim off the base, discard blemished or tough leaves, slice or tear the leaves from the stalks leaving as little green as possible on the stalks. Wash the leaves and stalks separately before cooking.

To prepare mature bok choy, cut the head in half lengthwise or into quarters and wash it thoroughly under the faucet or soak and dunk it in water until the stalks are clean of any dirt or sand from the garden. Baby bok choy can be rinsed without cutting it in half.

For the most delicate flavor, cook bok choy until just cooked and not a moment longer.

Serve. Bok choy can be eaten raw cooked or marinated. Use the stalks and leaves separately. The stalks can replace celery and the leaves can be used in place of spinach or chard.

Nutrition. Bok choy is a good source of potassium and vitamin A, B, and C and folic acid, calcium and iron.

The botanical name for bok choy is Brassica var. chinensis.