Cremini mushrooms should not be confused with all-white button mushrooms. The cremini has a brownish cast and twice the flavor of a cultivated white mushroom.

The peak season for mushrooms harvested in the wild is fall and winter when the weather is cool, damp and frosty, but almost all varieties of mushrooms are available year-round since they are mostly cultivated indoors.

How to Choose Cremini Mushrooms

How to Prep Cremini Mushrooms

How to Store Cremini Mushrooms 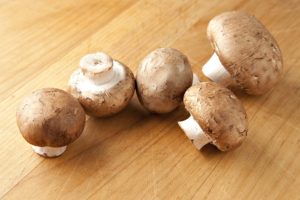 The botanical name for the cremini and portobello mushroom is Agaricus bisporus.