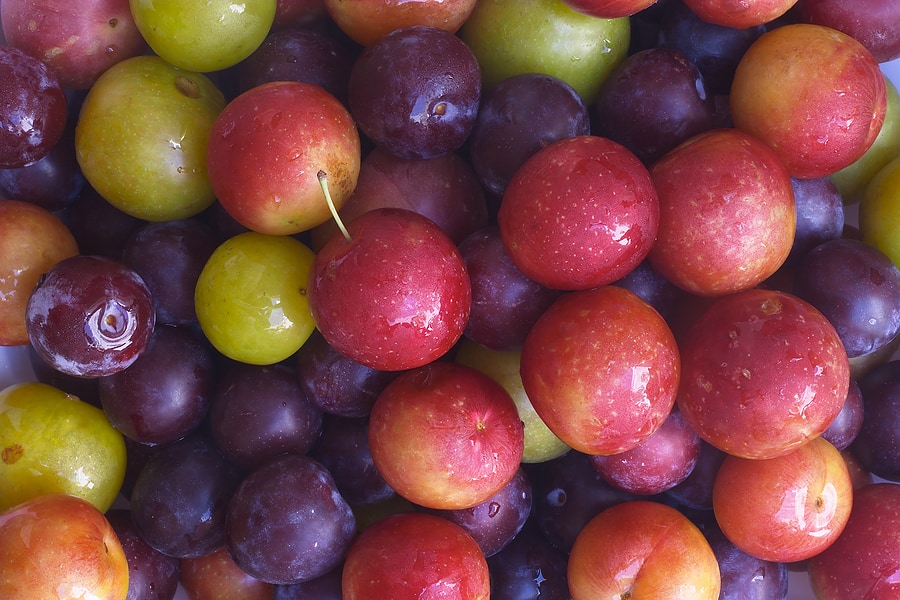 There are all different, shapes, sizes, and colors of plums to be tried. Ripe plums can range in texture from firm to slightly soft. They can range in flavor from deliciously sweet to tasty- tart.

Plums can be pink, red, scarlet, purple, blue-black, green, yellow or amber skinned. Their flesh can be yellow, green, pink, red, orange or a rainbow of the five. Plums can be round, oval, or heart-shaped and can range in size from as small as a grape to nearly as large as an apple.

Plums can be eaten fresh out of hand as a snack or dessert. They also can be stewed or used in jellies, jams, sauces, puddings, and crisp, cobblers, cakes, and tarts. Plums can be poached or baked like pears and peaches. Some plums can be dried and served as prunes.

There are more than 2,000 varieties of plums, some are purebred, the majority are hybrids. Most plums can be traced to three important plum species: Japanese plums, American plums, and European plums.

Japanese plums are the earliest plums of the season. These plums flower sometimes before the last frost of the season and are ready for harvest from two to three months later. Japanese plums are round or heart-shaped and larger and juicier than European or American plums. The best known Japanese-type plum–and one of the most popular plums in the world–is the Santa Rosa plum. It is red-skinned, yellowish-red fleshed, aromatic, and has a very sweet plum flavor. Japanese plums are actually misnamed; they are native to China.

European plums–also called common plums–ripen in late summer. European plums are medium-sized, oval-shaped, and dark blue or purple-red in color. They have a firm, dense yellow or greenish-yellow flesh and their stones do not cling to the flesh. European plums have extra high sugar content and are often made into prunes. They also are eaten fresh or used for canning and preserves.

Damson plums are similar to European plums but a different species. They are native to Europe and grew wild before the cultivation of European plums. Damson plums are small, blue-skinned, and rather acid and tart flavored. They are ideal for preserves, jams, and jellies. The dark yellow-skinned, freestone Mirabelle plum is a damson plum. The Mirabelle is grown mostly in northeastern France. It is used in tarts and preserves.

Green plums are also a type of European plum. They are round, green or golden-colored, and used for canning or eating fresh. Green plums are called Gages or greengages in England and Reine Claude in France.

Plums grow on deciduous trees that can reach from 15 to 20 feet tall. The plum’s leaf is burgundy colored and oval. The leaves are preceded in spring by white flowers. Plums can be clingstone, the flesh clings to the stone or freestone.

Local Season. The harvest season for plums is early spring until autumn with the peak harvest in late summer.

Choose. Select plums with a pleasant aroma that are full-colored for the variety and yield to the slight pressure of the fingers. Ripe fruit will be slightly soft at the tip end. The skin should have a powdery “bloom”.

Avoid plums that are too hard, too soft, bruised, or stained. Avoid plums with cracks or blemishes, broken or shriveled skin or brownish discoloration.

Store. Refrigerate ripe plums for up to 4 or 5 days. Ripen plums at room temperature till the skin loses it shine; plums ripen quickly.

Freeze plums in light syrup. First, halve and pit the plums or cut the flesh away from the pits in quarters. The pits will impart a bitter taste.

Prepare. Rinse plums before eating out of hand. To remove the pit, slice the fruit around the seam of freestone and semi-freestone varieties then twist the fruit in half and lift or cut out pit. Cut the flesh of clingstone plums away from the pit.

To peel plums, dip them in boiling water for 30 seconds, lift out with a slotted spoon, and cool in cold water. The skin will slip off.

Cook. Do not remove plum skin before cooking, allow the skin and flesh to cook together to combine flavors.

Poaching. Rinse and then prick the skin of each plum, Simmer in poaching liquid until tender when pierced (7 to 10 minutes) for Japanese-type plums (3 to 5 minutes) for European-type plums.

Serve. Plums can be eaten fresh out of hand or cooked.

Nutrition. Plums are a good source of potassium and also supply vitamin C and riboflavin.

Plum facts and trivia. The plum is native to China and traveled westward out of Asia. The word damson marks the plum’s ancient cultivation in Damascus in modern-day Syria. The ancient Romans grew 300 varieties of plums. In the twelfth century, European Crusaders introduced plums throughout Europe. The common plum was introduced to America by European settlers.

The ancient Greek word for plums was proummon. That became prūnum in Latin which became prune in English. The old Germanic language word pflaume, became plommon in Swedish, and plum in English.

The botanical name for the European plum is Prunus domestica; for the Japanese plum P. salicina; for the American plum P. americana; for the Damson plum P. insititia.

How to Plant, Grow, Prune, and Harvest Plums

How to Make Plum Jam 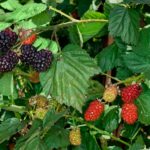