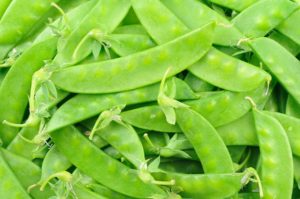 You can use snow peas in the same way as fresh peas or green beans. In fact, snow peas and green beans are interchangeable in most recipes.

Snow peas are edible-podded peas: you eat the seed and pod whole.

The peak season for snow peas is spring and then again in fall.

Snow peas can be eaten raw in salads and appetizers. They are sweet and crisp.

But snow peas are even sweeter cooked. They are a favorite in oriental-style soups and wok-tossed dishes. Their sweet texture is a perfect foil for Asian cookery accents such as ginger, garlic, chili, and soy sauce.

Snow peas have translucent, bright green pods that are thin and crisp. The seeds are tender and sweet and the pods are crunchy. The combination of tender, sweet, and crunchy is what makes snow peas special.

Snow peas are thought to be an Asian vegetable. That’s because today they are essential to Chinese cooking. Snow peas are the main pea eaten in China and Japan.

But snow peas were first cultivated in Holland. (Peas originated in Persia—modern day Iran—more than 12,000 years ago.) The snow pea was developed by Dutch farmers in 1536. The Dutch love developing new tender, sweet peas.

Choose. Select snow peas that have crisp, brightly colored pods with small seeds. Snow peas should have flat pods with barely developed seeds and be about 3 inches (7.5 cm) long. If you see vestiges of a petal at the stem end, you know it’s fresh.

Snow peas with swollen pods or that are too big will be tough and inedible. Avoid peas with yellow spots or signs of drying along the seams. Avoid pods that appear soft or wrinkled.

Store. Snow peas can be refrigerated in a plastic bag for up to 3 days. The longer you keep them, the less crisp and sweet they will become.

Prepare. Snap off the stem end of the pea just before cooking and pull away the string along the side. Young snow peas can be eaten raw.

Brief cooking snow peas even when used for cold dishes will develop sweetness, flavor, and color. Overcooked snow peas will be mushy.

Serve. Serve snow peas raw or cooked. Use snow peas as a side dish for meats or fishes or in salads.

Peas facts and trivia. From Holland, snow peas—which were then known as Dutch peas—traveled to England and from England traders introduced snow peas to China. The Chinese name for snow pea is hoh laan dau—which means Holland pea.

The snow pea became so popular in China that it was soon called the Chinese pea.

Here’s an even more interesting twist: the Chinese snow pea did not get the name snow pea in China. Immigrant Cantonese farmers in San Francisco during the nineteenth century called the Chinese pea shii dau—snow pea. No one is sure why.