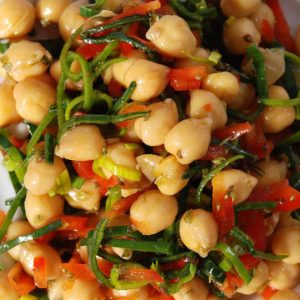 The chickpea can be used in appetizers, mixed salads, soups, main dishes, puréed, and ground and made into flour.

Garbanzo bean in Spain, pois chiche in France, ceci in Italy, hummus in the Middle East, gram in India, chickpea in the United States: by any name, the chickpea is a staple in cookery throughout much of the world.

The nutty flavor and creamy texture of the chickpea make it a robust and hearty addition to many dishes.

Split chickpeas are known as chana dal in India. Mature chickpeas are canned in brine and used in salads in the United States, usually called garbanzo beans. The chickpea has more texture than other legumes and does not fall apart as easily.

Gathered before their pods reach maturity, chickpeas can be prepared and served like green beans. Green pods and tender leaves are eaten as a green vegetable.

The Spanish use the garbanzo in stews such as cocido and the Mexicans use them in similar hotpots called puchero and olla. The Italians use ceci in minestrone soup. The French use the chickpeas in gratins covered with Mornay sauce.

Chickpeas are ground into “gram flour” and used in vegan cooking. The protein content of the chickpea is about 20 percent. It is an important meat substitute.

The chickpea is a bushy, upright plant with compound leaves that are covered with sticky hairs. Chickpea pods are puffy and grow to 1 inch (2.5 cm) long and contain one or two buff-colored seeds. Each seed has a small “beak” at its tip hence the common name chickpea.

The chickpea requires at least 100 days of warm dry weather to mature. It is often cultivated in subtropical and Mediterranean climates as a cool-season crop. In temperate regions of the Northern Hemisphere it comes to harvest with other shell beans in late summer and early fall.

Choose.  The immature green shell can be picked and eaten like a snap bean. Choose pods that are young and tender. For dry beans, harvest after plants mature and leaves have turned completely brown.

Store. Fresh chickpeas will keep unshelled in the refrigerator for one week. You can freeze, can, or dry shelled chickpeas.

Unshelled chickpeas can be dried on a cloth or plastic sheeting in the sun until the pods split. Store dried, shelled chick peas in a cool, dry place for 10 to12 months.

Serve. Use chickpeas fresh or dried in side dishes, soups, stews, dips, and vegetable curries. Shelled chickpeas can be steamed or boiled like peas or roasted like peanuts. Whole dried seeds are used like dry peas or beans.

Green chickpea pods and tender leaves can be eaten as a green vegetable: cooked like spinach, added to curries, or fried with spices.

To make hummus: grind boiled chickpeas into paste, mix with olive or sesame oil, flavor with lemon and garlic. Eat hummus on pita breads or crackers.

Chickpea facts and trivia. The chickpea is native to the northern regions of the Fertile Crescent from southern Europe to India. It was in cultivation at least 5,000 years ago in the Mediterranean region and 4,000 years ago in India. More than 80 percent of the chickpeas grown today are grown in India.

Cicer is the Latin word for “pea.” That became chiche in Old French and chick in Middle English. The tag “pea” in modern English is redundant.

The botanical name of the chickpea is Cicer arietinum.