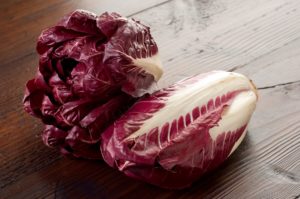 Radicchio is a sharp-tasting cool-weather salad green that can be simply dressed with vinaigrette. It also can add a spicy note to mixed green salads dominated by milder salad greens.

Grill radicchio with olive oil and salt or flour and fry it to accompany meats. Radicchio can be sautéed or baked. Cooked radicchio will add color and its distinctive flavor to soups, rice, legumes, pasta, omelets, and tofu.

Radicchio—there are several cultivars–is a variety of leaf chicory that resembles a small red head of lettuce or cabbage. Radicchios can range in size from a large radish to a large grapefruit. The leaves range in color from bronzy green to wine red or magenta and are veined in white. Some varieties start out green leafed but turn deep reddish colored when the temperature drops.

The peak season for radicchio is midwinter to early spring, but in cool summer regions it can be grown year-round. The slightly bitter taste of radicchio sweetens with cooler day temperatures.

The cultivation of radicchio began in earnest in Italy during the sixteenth century. The development of modern cultivars began in the 1860s.

There are five notable varieties of radicchio:

• Chioggia (Rosa di Chioggia): the most common radicchio resembles a compact head of cabbage with dark wine-colored leaves and white ribs with a bittersweet to bitter taste.

Radicchio is native to the Mediterranean region. Its modern cultivation has centered in the Vento region of northern Italy.

Choose. Select firm heads that are crisp, fresh, and full-colored. Avoid heads with brown or wilted leaves or heads with damaged bases.

Store. Radicchio will keep wrapped in a paper towel in a plastic bag in the refrigerator crisper for 2 to 3 days. Store radicchio unwashed.

If wilted soak leaves in a bowl of cold water to revive. Prepare radicchio as you would lettuce: cut out the core in a cone.

Serve. Eat radicchio raw or cooked. You can use radicchio in place of chicory and escarole in most recipes.

Temper its bitter flavor by mixing with other salad greens. Dress radicchio with vinaigrette.

The botanical name for radicchio is Cichorium intybus.