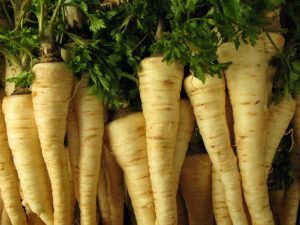 Parsley root is a carrot-shaped, beige-white root whose flavor is somewhere between celeriac and carrot with hints of celery, turnip, and parsley leaf.

This winter and early spring vegetable can be steamed, boiled, puréed, or creamed. Use parsley root in braises, soups, stews, and vegetable mixes to add depth and aroma. It works particularly well in combination with other roots and tubers such as carrots, potatoes, turnips, and onions.

You will find parsley root at your farm market from late summer through early spring. The best supply of parsley root is in mid-winter. A touch of frost will improve its sweetness and flavor.

Parsley root is a biennial grown as an annual. Its tapering root resembles salsify or a small parsnip—the root growing about 6 inches (15 cm) long and 2 inches (5 cm) wide. It is often double rooted.

The leaves of parsley root are coarse textured and can be used as a garnish.

Choose. Select parsley roots that are firm, creamy-beige, unblemished and about the same size. The best tasting roots will be small to medium sized. Avoid withered roots.

Buy parsley root with the feathery, bright green leaves attached. Roots with leaves that are limp or wilted are not fresh. Do not trim off the leaves until you are ready to use the roots.

Store. Parsley root will keep in the refrigerator for up to a week if you first wrap it in a paper towel and place it in a plastic bag. The leaves will keep for just 1 or 2 days.

Prepare. To prepare parsley root for cooking remove the leaves and fine roots and then gently scrub with a brush to remove any soil. The peel is tasty so don’t peel or scrape off the skin.

Trim off the greens, wash and dry them and reserve for used like regular parsley.

Serve. Parsley root is most often eaten cooked, but it can also be eaten raw.

Nutrition. Parsley root contains vitamin C and iron. It is high in sodium.

Parsley root facts and trivia. Parsley root can be eaten cooked or raw. It is most popular in central Europe—Austria, Hungary, Poland, and Germany—and in Russia and Holland. It is one of several vegetables and herbs known in Germany as suppengrun or soup greens which are combined with beef or poultry and boiled and used as soups and sauces.

Parsley root was first used for cooking in Germany in the sixteenth century. That is where it got the name Hamburg parsley.