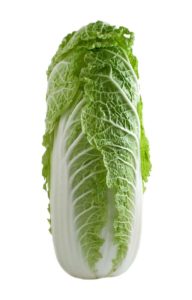 Chinese leaves is a general name for several varieties of thick-stalked and green- or pale green-leaved vegetables that fall under the even more generic name Chinese cabbage. Chinese leaves are sometimes also called celery cabbage.

Chinese leaves are known more specifically by their varietal or type names such as wong bok or Napa cabbage, Michihili, and pe-tsai.

Each of these varieties of Chinese leaves is sweet tasting with a slight mustard tang. They offer a mild alternative to the stronger flavored European cabbages.

The leaves of these vegetables are thinner than the waxy leaves on round-headed cabbages. They are more delicate, require very short cooking times, and offer tasty last-minute additions to stir-fries, steamed dishes, and soups. They can also be eaten raw as additions to salads.

The upright stalks of these vegetables look like pearly wide ribs.

There are hundreds of Asian members of the Brassica genus. It is believed that Chinese leaves originated as a cross between bok choy and turnip.

There are three general types of Chinese leaves or Asian cabbages in the Pekinensis group: the “tall cylindrical,” the “hearted’ or “barrel-shaped,” and the “loose-headed.”

Michihili is a semi-heading vegetable—the leaves may turn slightly inwards or outwards–that looks something like a head of cos lettuce. Michihili can grow to 18 inches (45 cm) tall. It is quite mild flavored and can absorb the flavors of the vegetables, meats, and poultry it’s cooked with.

The hearted or barrel-shaped types of Chinese leaves form a compact head with tightly wrapped leaves around a dense heart. These are commonly referred to as wong bok or Napa cabbage.

Wong Bok or Napa Cabbage is stout to about 10 inches (25 cm) tall. Napa cabbage—which is named after the Napa Valley in California where it was first commercially planted in the United States—is the most popular of Chinese leaves. Napa is a tender and very sweet-tasting cabbage.

The loose- or open-headed type of Chinese leaves has a lax demeanor with outwardly floppy textured leaves. The best known of this type is called pei tsai.

Pei Tsai is loose headed and does not form a heart. Pei tsai is slightly cylindrical with a ruffled appearance and grows to about 12 inches (30 cm) tall. This cabbage has a tangy sweet but not spicy flavor and is favored by home gardeners who benefit from its cut and come again harvest.

There are dozens of cultivars that belong to each of these three types of Chinese leaves. None looks exactly the same, though all conform in some manner to the general description of their type.

All of the Chinese leaves varieties are believed to have originated in China thousands of years ago. They were spread throughout Asia by Chinese traders and were first introduced to Europe in 1751 by returning missionaries. Chinese leaves were regarded as curiosities in Europe and never gained general cultivation.

Chinese leaves were re-introduced to Europe again in the 1970s by Israeli farmers and came into commercial cultivation in California’s Napa Valley at about the same time. Known for many years under the generic names Chinese cabbage, Chinese leaves, and celery cabbage, they are now beginning to appear under their more specific varietal names.

Choose. Select Chinese leaves that are compact, firm, crisp and fresh. There should be no brown spots on the ribs. Avoid greens whose leaves are slightly wilted or exhibit brown spots.

If you are not exactly which Chinese leaves will work point and choose or ask your farm grower which Asian vegetables are being grown in your region.

Store. Chinese leaves are best used in 3 or 4 days. Napa cabbage will keep for 2 weeks if tightly wrapped in plastic and placed in the vegetable drawer of the refrigerator. Crisper leaves will be more flavorful.

Prepare: Wash Chinese leaves just before using. Remove the desired number of leaves and trim the base of each, wash, drain and use cooked or raw.

Because of its delicate taste, the Chinese leaves is a good choice for wrapping fish that you plan to steam or for lining the bottom of a bamboo steamer basket. Its sweet flavor will not distract from other vegetables, fish or poultry that you use.

In Korea, China and Japan, Chinese leaves are used to make fermented and salted pickles.

Nutrition. Chinese leaves are a good source of vitamin C, folic acid, and potassium, and contain some vitamin A.