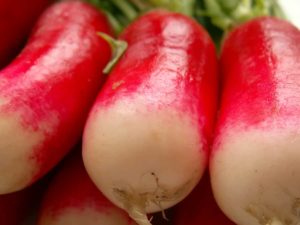 Radishes can be small and round, large and round, oval, oblong, and long. A cherry radish can be about ½ inch (13 mm) in diameter—about the size of a cherry, and the carrot-like giant daikon can grow to 1½ feet (45 cm) in length.

Radishes can be red, white, red and white, pink, purple, green, or black and many shades in between, and their interior flesh can be almost as many colors.

Radishes can taste mild and sweet or peppery and pungent.

Radishes are a quick growing, cool-season crop, so the first crisp, crunchy radishes of spring will be along soon.

Red Round. The most familiar radish is the round or oval red radish. Varieties like ‘Champion’, ‘Cherry Belle’, and ‘Comet’ are the ones you likely will find at your farm market. These radishes have a solid, crisp, white flesh.

The red, round radish is mild tasting in spring and grows more peppery as the weather warms. The red radish is one you can slice and eat sandwiched with bread and butter or as a hors d’oeuvre.

French breakfast. The second most familiar radish is the French breakfast radish. It is shaped like a small carrot with red skin tapering to white at the root end and white flesh. This radish is mild enough to eat for breakfast—like the French do–and is perfect served with other raw vegetables as crudités.

White daikon. The large white radish or daikon (it’s Japanese name) has long been popular in Asian countries. It has a cucumber shape, white flesh, and is more peppery tasting than most red radishes. It grows mild with cooking and so is served cooked at breakfast, lunch, and dinner in many Asian countries.

Black radish. The black radish—the size of a large red radish or turnip but dull black–is almost as pungent as the horseradish. It requires draining—treatment with salt—or cooking to make it easily edible. The black radish—which is sometimes called the black Spanish radish—is drier than other radishes and is a favorite in Eastern Europe where it is often paired with sour cream or seafood.

Korean radish. A Korean radish is a large turnip-sized root that has a jade green skin and a flesh that ranges from green to white. It is a juicy, sweet-tasting radish.

Radishes in the kitchen:

Choose. Select a radish that are well formed, feel firm when it is gently squeezed. If it gives to pressure, the interior will likely be pithy, not crisp. A radish should be free of blemishes, cuts or cracks or yellowing. Attached leaves should be green and crisp.

Black radishes should be heavy and free of cracks.

Daikon and Korean radishes should be evenly shaped and firm with a glossy sheen.

Store. Radishes can be stored in a plastic bag in the refrigerator for up to 5 days. Trim off green tops before storing. Wash and trim root ends just before using.

Prepare. Wash radishes in cool water before serving, trim off the stem end and tip, and peel if desired.

Daikons have a thin skin that can be simply removed by a vigorous scrubbing.

Black radishes should be scraped, scrubbed, and peeled before cooking.

For added crispness, soak radishes in ice water for a couple of hours before serving.

Serve. Radishes can be served raw in appetizers, salads, sandwiches or with dip. Cooked radishes can be added to soups, stews, omelets, and stir-fries.

Nutrition. Radishes are a good source of vitamin C and potassium and supply folic acid.

Radishes are members of the mustard family. The mustardy tang or pungency of a radish comes from an essential oil that is concentrated near the surface just beneath the skin. Just how mild or peppery a radish tastes depends upon the variety, the age, and even the soil in which it was grown.

Radishes are native to the eastern Mediterranean, but have made their way around the world. Radishes have been used as food since prehistoric times in Europe, China and Japan.

The botanical name for the radish is Raphanus sativus.