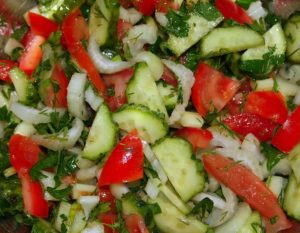 Sliced cucumbers, tomatoes, celery, and parsley or spring onions are the ingredients of a tasty warm-weather salad or sandwich.

Or you can add minced cucumbers and dill to plain yogurt to make a cooling warm weather soup or snack.

Why do cucumbers and warm weather mix so well? Cucumbers are more than 90 percent water. There crunchy texture, sweet grassy fragrance, and cool, mild flavor are perfect matches for late spring and summer sandwiches and salads.

You can also steam and sauté cucumbers and enjoy them as a vegetable side dish.

The peak season for fresh-from-the-garden cucumbers is late spring through summer, May to August in the Northern Hemisphere.

Cucumbers are warm-season tender annuals and belong to the same family as squash and melons. There are more than 40 varieties of cucumbers, and they range in size from 3 inches to 2 feet (7.5-60 cm) long. Cucumbers can be long and cylindrical, short and stout, or round like a lemon or apple. They range in color from dark green to pale green to yellow.

Cucumbers varieties fall into a few simple categories. Here are the basics:

• American slicing varieties grow from 6 to 10 inches (15-25 cm) in length and about 1½ inches (3.8 cm) around. Slicing cucumbers are grown outdoors and have smooth, usually thick, dark green skins. They are cylindrical and taper at each end. These cucumbers have been hybridized for size and shipping. They are large, full of water and can be a bit bland tasting. Use these for slicing and cooking. Check to make sure the grower has not waxed the skins of these cucumbers for shipping. Cucumbers are waxed to hold in the moisture and must be peeled before you eat them.

• Middle Eastern cucumbers—also called Persian cucumbers and Beit Alpha types—look like European slicing cucumbers but are smaller and have slightly ridged skins. These cucumbers are grown both outdoors and in greenhouses. They have a light green flesh that is sweet, crunchy, and juicy (not watery). These are delicious cucumbers!

• Pickling varieties—also called sweet or dills, cornichons, and gherkins—grow to various lengths and are used to make pickles. The regular American dill—sometimes called “Kirby” after a named variety–grows from 1 to 6 inches (2.5-15 cm) long and has a pale to dark green bumpy skin. The French cornichons are smaller, 3 to 4 inches (7.5-10 cm) long. Gherkin pickling varieties have short, stumpy fruit to 3 inches (7cm) long.

These cucumbers have bumpy skins, a solid crunch, and can be lightly sweet if eaten fresh, not pickled.

• Oriental cucumbers—also called Asian cucumbers, includes Japanese and Korean slicing cucumbers—range in size from 8 to 12 inches (20-30 cm) long. They are usually narrower than English slicing cucumbers and have bumpy skins and small spines that are easily brushed away. Fresh, they have a concentrated flavor, grassy aroma, and pickle-like crunch. They don’t need peeling and they have very few seeds.

• Armenian cucumber—also called a serpent or snake melon—is not of the same species as other cucumbers, but it looks and is eaten like a cucumber. This cucumber is long and thin and can be slightly coiled. It has a pale green skin and pale green flesh. The Armenian cucumber is very thin skinned and has mild flavor with a slightly sweet and citrus aftertaste.

• Apple and lemon cucumbers are round, yellow-skinned, and grow to 2½ inches (6 cm) in diameter. These are generally thin-skinned with a mild, sweet flavor and nice crunch. Use them sliced in salads and sandwiches and as a garnish for fish dishes.

Cucumbers probably originated in India or Thailand. They have been grown in India for at least 5,000 years. From India, traders took cucumbers to China and later to ancient Greece and Rome. The cucumber came to North America with the first colonists.

Choose. Select cucumbers that are green and firm with no sign of bruising or yellowing.

Medium-size cucumbers will be tender and are preferable for eating fresh. Over-large cucumbers tend to be bitter and bland tasting and are likely to contain numerous hard seeds. Avoid cucumbers that have soft spots or that are shriveled.

Store. Keep pickling and slicing cucumbers in the refrigerator for 3 to 5 days. Cucumbers kept too long can suffer chilling injury.

Prepare. Thin skinned cucumbers do not require peeling. Waxed cucumbers (for shipping) should be peeled before eaten. There is no need to peel cucumbers that are fresh and that do not have a wax coating. Scrub pickling cucumbers to remove loose spines.

You may need to remove seeds from large cucumbers if the seeds are hard. To seed a cucumber, slice it in half lengthwise and scrape out the seeds.

Draining can make a cucumber easier to digest. Sprinkle the cucumber slices with salt and let it “drain.” Excess moisture and bitterness will disappear.

Cook. Cucumbers can be eaten raw or cooked like squash.

Serve. Cucumbers are usually eaten raw but may be cooked—prepared like squash. Cucumbers can replace squash in most recipes.