Cucumber beetles—spotted and striped—eat a variety of crops, not just cucumbers.

Cucumbers, corn, lima and snap beans, melons, peas, pumpkins, potatoes, sweet potatoes, peanuts, eggplant, tomatoes, summer and winter squash—cucumber beetles feed on more than 280 plants. They feed on leaves and flowers and tunnel into fruit; early in the season they eat young seedlings. The larval stage of the cucumber beetle is called the corn rootworm and feeds on the roots of corn.

Cucumber beetles are yellow, the size of ladybugs, but pointier in front. The cucumber beetle is of the genus Diabrotica; there are 338 species worldwide, seven in North America.

Cucumber beetles lay yellow-orange eggs in the soil at the base of plants. In mid-summer white larvae about ½ inch long (with a brown head and brown spot on the last segment of the body) feed on roots and soon weakens host plants. Adults chew leaves and flowers; an adult cucumber beetle will eat the tassels, leaves, and silks of corn plants. Feeding adults can transmit bacterial wilt and cucumber mosaic virus to vegetable crops.

There are two to four generations of cucumber beetles each year; adults overwinter in garden debris and emerge in spring when temperatures reach 65°F.

Cucumber beetles can be controlled by several methods:

• Keep the garden clean. Remove plant debris from the garden each year; cucumber beetles overwinter in plant materials left in the garden. Cultivate the garden in fall and early spring; this will expose overwintering beetles to killing frost and freezing weather.

• Timed planting and trap crops. Plant crops late; cucumber beetles emerge in spring when temperatures average 65°F; if host crops aren’t in the garden, cucumber beetles will go elsewhere to feed. An alternative is to plant a trap crop of host plants that will attract beetles and their larvae; these crops can be sprayed to kill off beetle infestations and new crops for harvest can then be planted.

• Sticky traps. Cucumber beetles are attracted to the color yellow. Place yellow sticky traps around the garden to catch adult beetles. You can paint a sheet of cardboard yellow and cover it with an adhesive such as Tanglefoot to make your own traps, or you can purchase sticky traps at a garden center.

• Cucumber traps. Cucumber peelings and the rinds of cantaloupes contain cucurbitacin, a chemical that attracts cucumber beetles. Place peelings or rinds around the garden and coat them with insecticidal rotenone dust or spray. Check the traps daily. Squash blossoms also attract beetles. Check blossoms for beetles in late evening to handpick and crush beetles.

• Handpicking. Picking beetles off of crops by hand daily will greatly reduce adult beetle damage. Hold open a plastic bag and give plant foliage a gentle shake (beetles take shelter in the shade of foliage); beetles will tumble off plants and into the bag. Place the bag in a freezer until the beetles are dead or set the bag in the sun and let them cook.

• Nematodes. Heterorhabditis nematodes attack cucumber beetle larvae. Nematodes are available commercially and can be added to the soil at planting time. Nematodes (microscopic worm-like creatures) burrow below the root zone in time so multiple applications of nematodes may be necessary.

• Toads. Toads will eat cucumber beetles (and earwigs and cutworms among other pests)—give toads water and dark, damp spots to shelter in your garden.

• Deterrent plants. Nasturtiums deter cucumber beetles and bean beetles. Plant nasturtiums on the border or among the crops you want to protect.

• Pyrethrins. Use a pyrethrum-based pesticide for serious infestation—as a last resort. Pyrethrum comes from a plant, Chrysanthemum cinerariaefolium. There are several pyrethrum-based pesticides. Those containing pyrethrum are made using parts of the plant itself and are least toxic. Those labeled pyrethrin are made from the toxic chemicals extracted from the plant. Pyrethrum-based pesticides are lethal to both pest insects and beneficial insects. Target only areas where the beetle infestation is most severe. Use these pesticides in the evening when cucumber beetles have settled on plants and beneficial insects are least active; pyrethrum dissipates quickly, most of the toxicity will be gone by morning.

Pyrethroids are synthetic compounds similar to pyrethrin but much stronger and often combined with other toxins. They also can be used as a last resort against cucumber beetles. 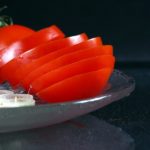 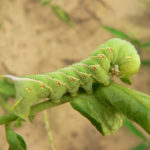