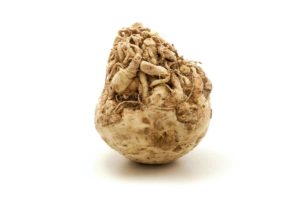 Celeriac combines the sweet taste of the mildest celery with the light peppery zip of parsley.

Celeriac—which is also known as celery root, celery knobs, and turnip-rooted celery—can be used as a substitute for potatoes, but you can easily learn to like it for itself.

Celery root rémoulade is a standard first course or hors d’oeuvre in cafes in France. With rémoulade—a mayonnaise-based sauce, celeriac is sliced into fine julienne strips and served uncooked.

But celery root also can be boiled, braised, sautéed, and baked. Diced and boiled it will be ready in about ten minutes.

Celery root also can be served in purées, soups, fritters, and stuffings.

Celeriac is a cool-weather vegetable so you can find it at your farm market from late fall to early spring.

Celeriac is a turnip-like, bumpy-knob of a root that forms just above the ground. It grows from 2 to 6 inches (5-15 cm) in diameter and has a rough brownish skin that is dotted with rootlets. Underneath its thick skin, celeriac has a creamy white, crisp flesh.

Celeriac is not the same plant as stalk celery. It is a variety of celery that has been cultivated for its bulbous root not its stalks.

While both celery and celeriac got their start in the ancient marshlands of the Mediterranean region, celeriac was adapted for cooler weather. It was cultivated by the ancient Greeks and Romans and later considered a delicacy in the Arab world.

Today celeriac is commonly grown in northern and Eastern Europe where stalk celery does not grow well. To a lesser extent, it is also grown in Asia and North America.

Choose. Select large, smooth celery knobs with minimum of rootlets. If the leaf tops are attached they should be green and crisp (but the leaves are not edible). Avoid small or soft celeriac or celeriac that sounds hollow.

Because celeriac is so thick skinned and must be peeled before it is served, there may not be much flesh to enjoy if you choose a root that is too small. Look for roots that are more than 3 inches (7.5 cm) in diameter.

Store. Celeriac will keep in the refrigerator for up to one week in a perforated bag. It can also remain in the ground in areas where freezing weather is not a problem. Celeriac does not freeze well.

Prepare. Before using celeriac, wash and then cut off the top and a thin slice of the base. Peel away the tough outer skin with a knife. Once peeled, drop the bulb into cold acidulated water to prevent the bare root from discoloring. Cook whole or cut up in water with lemon juice until tender to the core when pierced.

Serve. Celeriac can be served raw or cooked.

The botanical name for celeriac is Apium graveolens var. rapaceum.