When it comes to cookery, the term mushroom refers generally to cultivated mushrooms.

Almost all of the mushrooms that you will take home from the market for use in the kitchen have been cultivated indoors under controlled conditions. The mushroom is a fungus and to keep the strain pure, mushroom growers work hard to keep all other fungi and bacteria out of the growing area.

The common white button mushroom has been in cultivation for hundreds of years. The first cultivated mushrooms were grown by the ancient Greeks and Romans. The commercial cultivation of mushrooms began in France during the rule of King Louis XIV in the seventeenth century.

Talk to your local mushroom grower to get the pedigree of mushroom varieties you are interested in. You will probably be able to find locally grown shiitake mushrooms that in years past grew only on logs in Japanese forests and truffles that once grew only under the roots of young oak trees in France.

There are more than 35,000 varieties of mushrooms, but only a few hundred of those are in general cultivation. Here are some of the best known culinary mushrooms with their botanical names in parentheses:

• Button (Agaricus bisporus). Also known as the common or white mushroom. Plump and dome-shaped with a smooth texture and middle flavor. May be white, cream or tan colored. Cultivated on a large scale. Known in France as champignon de Paris. Simmer or add to soups. Good raw or cooked. Range in size from small buttons to jumbos suitable for stuffing or baking.

• Chanterelle (Cantharellus cibarius). Grow wild in the forests of the Pacific Northwest. Most common is the yellow or golden chanterelle with a wavy cup-shaped cap and no gills underneath. Apricot-like aroma and delicate nutty flavor. Choose ones that are plump and spongy. Avoid shriveled caps. Sauté or fry. Known as girolle in France.

• Cremini (Agaricus bisporus). Coffee-colored mushrooms with very good flavor that are very similar to common whites but with a deeper flavor. Cap is ½ to 2 inches in diameter. Cremino is the singular. Sometimes called common brown mushroom and Roman mushroom.

• Enoki (Flammulina velutipes). Long stems to about 4 inches and tiny caps, small white mushrooms resemble bean sprouts with mild flavor and slightly fruity odor. Delicate and should be eaten raw or briefly heated in a flavored broth. Choose firm and white ones. Use raw or in soups. Cultivated in California, Malaysia, and Japan.

• Hedgehog (Dentinum repandum). Buff colored caps with pale stems and tiny teeth (not gills) on the underside of the cap. Mild, sweet flavor and a firm, chewy texture. Cook before eating.

• Maitake (Grifola frondosa). Brownish gray mushroom with a tightly ruffled edge and a rich, woodsy taste that is enhanced by cooking. Sometimes called hen-of-the-woods. Also sometimes called the “king of mushrooms” because they can grow to as much as 50 pounds.

• Morel (Morchella esculenta). Rich and intensely earthy flavored with an odd texture; may be tan, yellow, or black with a short, thick stem and pointed cap. Almost always grown wild. Elongated dome from 1 to 5 inches high has a sponge-like appearance. The darker caps are most favored. Sometimes called sponge mushrooms. Choose firm, yet spongy ones. Heat in butter or simmer.

• Nameko (Pholiota nameko). Orange-brown caps 2 to 3 inches in diameter. Soft, gelatinous texture with a rich, earthy aroma and flavor. Popular in Japan where it is used for soups on one-pot dishes. Sometimes called cinnamon cap.

• Oyster or Pleurotte (Pleurotus ostreatus). Fluted, soft brown caps grow 1 to 3 inches in diameter. Grow wild and cultivated. Cultivated are white or black. Flesh is smooth texture and a flavor something like seafood. Eat only the caps. Angel trumpets are an oyster hybrid that is larger and whiter. Sauté or fry.

• Porcini (Cèpes) (Boletus edulis). Rich, meaty flesh with fat, firm, stalks up to 10 inches high with a cap about 2½ to 6 inches across. Choose tan to pale brown ones that are not crumbly. Sauté or fry or eat raw.

• Portobello (Agaricus bisporus). The Portobello is a mature, larger version of the cremini with a cap that can be 6 inches in diameter. Solid, meaty texture and flavor.

• Shiitake (Lentinus edodes). Large, flat, dark brown mushroom can be 8 to 10 inches across with a woody odor and rich mushroom or smoky flavor. Caps are soft and meaty. The stem is too tough to be eaten but can be used in stocks. Cultivated for more than 2,000 years. Choose plump mushrooms with edges that curl under. Sauté or fry. Sometimes called golden oak mushroom.

• White (Agaricus bisporus). The most well-known mushroom. Caps fit close to the stem. Creamy to beige color; good raw or cooked. Range in size from small buttons to jumbos suitable for stuffing or baking. 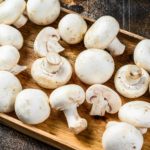 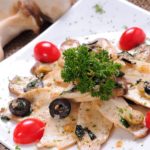