Start leeks indoors in winter for planting out in very early spring for an early summer harvest. Set out leeks transplants in late summer for a fall and all-winter harvest.

Leeks are a cool-season crop and produce best if the days remain below 75°F.

If you live in a very warm or hot summer region—the South and Southwest—grow leeks in the cool time of the year: start seeds 8 to 10 weeks before the first expected frost in fall. They will be ready for harvest in late winter and early spring.

Mature leeks can sit in the garden under snow and freezing cold. Just cover them 12 inches of dry leaves or straw and harvest them when you need them through the winter. Leeks don’t store very well (about a week in the refrigerator), so it’s best to harvest them as you need them.

Leeks are sweeter and more delicately flavored than onions and garlic—cousins of leeks. Serve leeks steamed or braised, chilled in a salad, or in a hot leek and potato soup.

There are several varieties of leeks; some come to harvest in as few as 50 days, others take 140 days to reach full size. As a rule, shorter-days-to-maturity varieties are less cold hardy. Select longer days to harvest varieties for storing in the garden through the winter. Short-season leeks have a thinner stem and don’t keep as well as cold-hardy long season varieties.

Here are a few varieties to consider:

To grow large, white, succulent leeks you must blanch the lower part of the stem or shank by hilling the soil up around the stalks as they grow or growing them in biodegradable tubes.

Commercially grown leeks are often gritty because soil is pushed up around stalks mechanically. Soil and sand can easily slip between the whorls of overlapping leaves low on the plant. Homegrown leeks can be kept clean with a bit of attention and care during the growing season.

Hill up soil or aged compost around the base of growing leeks by hand; simply mound up the soil with your cupped hands. Avoid sprinkling soil over the tops of plants; soil that falls into the space between leaves will be trapped. If you plant leeks in trenches, gently push the soil in around the stems and firm it in place as the plant grows. Fill soil in around leeks gradually as they develop. Don’t brush soil on the leafstalks. Rinse away soil when the stalks are lifted.

How to Grow Leeks in Tubes

Leeks can be grown, blanched, and kept clean by growing them in tubes—paper tubes or tubes made of biodegradable material (cardboard toilet paper or paper towel tubes will work) or in recyclable plastic tubes such as thin-walled PVC tubing. Tubes will cuff and surround leek stems as they grow; the tubes bock light (and soil) from the stem leaving the shank tender and white at harvest. This is an easy alternative to hilling up leeks.

Place tubes around leeks from the base of the plant at soil level to just below the point where the leaves fork off from the base. You can do this as soon as the plants are well rooted. Simply gather the leaves and fit them into the tube and then work the tube from the top of the plant down into the soil. Alternatively you can cut the tube lengthwise and then open it to fit around the stem and then tape the edges together. Stake the tubes for stability and leave them in place until you are ready to harvest.

More on growing leeks How to Grow Leeks and Leek Seed Starting Tips. 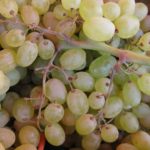