Rhubarb is grown for its leaf stems (called petioles) which are thick and fleshy. The stems are colorful—cherry-red to deep red and sometimes green–and tart. They are used in jams and pies—with plenty of sugar added—and are often matched with the sweetness of strawberries.

Rhubarb is a perennial vegetable that requires a dedicated growing spot in the garden for 10 years or more. Rhubarb favors cold winters and mild summers. It may not do well where summers are hot.

Here is your complete guide to growing rhubarb.

How to Divide Rhubarb

Rhubarb plants should be divided every 4 to 5 years to keep plants from crowding each other and to give them room to produce thick stalks. When stems stay thin during the growing season, it’s time to divide rhubarb. Divide plants when they are dormant either in early spring or autumn. Here’s how:

How to Force Rhubarb for Winter Harvest

Rhubarb can be forced to produce new stalks for harvest in winter. Here are two ways to force rhubarb:

Rhubarb stalks will be ready for harvest about 90 days after plants begin growing in spring. Here are popular varieties and cultivars to grow:

More tips: How to Harvest and Store Rhubarb 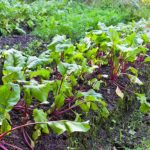 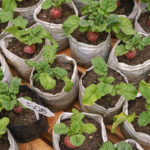