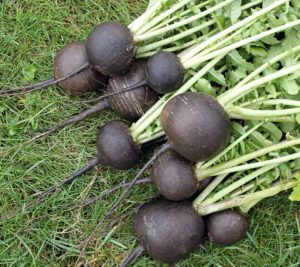 The Black Spanish Radish will add a zingy addition to a fresh garden salad.

Some radishes—such as the French breakfast radish—can be mild and almost sweet. Others have a peppery flavor that will zip up your palate right into your nostrils. The black Spanish radish is one of them.

The black Spanish radish is a winter-keeping radish meaning if you set it aside under the right conditions it will keep for use at the table long after your local radish harvest season has past.

Types of black radish. There are actually two types of black Spanish radish—the round one that is about the size and shape of a turnip and the long black Spanish radish which is cylindrical and can grow to about 8 inches (20 cm) long. Both are black skinned and have a flesh that is crisp and white and quite peppery. The long variety will be more pungent than the round, blunt ended one.

Choosing. When choosing a black Spanish radish, look for one that is solid, heavy, free of cracks, and generally unblemished. Always avoid radishes that give in to pressure when squeezed. Those radishes will likely be pithy.

Serving. Here is a recipe for a black Spanish radish salad: Shred the root and marinate it in salted water for two hours. (This will take the edge off its pungency.) Drain and press the shredded root dry. Serve as a salad with vinegar and oil. Sprinkle fresh minced herbs over the top.