The name Chinese cabbage can lead you to several very different vegetables.

There are dozens of varieties of “Chinese cabbage” each with unique tastes and culinary attributes.

All of the so-called Chinese cabbages belong to the genus Brassica which is a diverse group of vegetables that include cabbage, kale, Brussels sprouts, cauliflower, broccoli, kohlrabi, mustard, rutabaga, and turnips.

Bok choy can be eaten raw—the leaves are succulent and tasty and the stems are juicy and crunchy. You can cook bok choy in stir-fries and soups. Thinly slice the ribbed stems or cut them into squares and cook them briefly.

The leaves of bok choy are mostly water so it’s best to cook the leaves separate from the stems. The stems will take longer to cook.

The Brassica variety pekinensis is commonly referred to as Chinese leaves, celery cabbage, and in the United States as Napa cabbage. There are three general types of cabbages in the Pekinensis group: the “tall cylindrical,” the “hearted’ or “barrel-shaped,” and the “loose-headed.”

The hearted type has compact, barrel-shaped heads with tightly wrapped leaves and a dense heart. These are commonly referred to as wong bok or Napa cabbage.

The loose- or open-headed type has a lax or floppy demeanor and textured leaves. These are also known as pei tsai.

Chinese leaves can be eaten raw in salads for their mild flavor and crunchy texture or used in stir-fries, stews, or soups.

Avoid bok choy or Chinese leaves whose heads are wilted, or limp, or discolored. 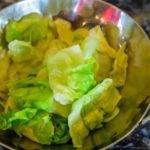