When it comes to cooking potatoes, choose your potato for the style of cooking you have in mind.

When you are standing in front of bins of potatoes, which variety or type of potato will cook up the way you want it to?

A guide to potato varieties and types:

• Russet potatoes—also called old potatoes, baking potatoes, or Idaho potatoes (if they were grown in Idaho)—have an oblong, elliptical shape, and a rough, netted, brown skin with numerous eyes and white flesh. Russets grow from 4 to 6 inches (10-15 cm) long and about 2 inches (5 cm) in diameter.

Russets are low in moisture and high in starch so they cook up dry and fluffy. Russets are suited for baking, mashing, and deep frying (French fries). The top varieties are russet Burbank, russet Norkotahs, russet Arcadia, and russet Butte.

• Long white potatoes–also called white rose or California long whites (because they were developed in California)—have an elliptical shape and thin ivory white to pale gray-brown skin with imperceptible eyes. Long whites grow from 4 to 6 inches (10-15 cm) long and about 2 inches (5 cm) in diameter.

Long whites have a medium to low starch content and are moister than russets. You can use long whites for boiling, baking, or deep frying. Long whites keep their shape when cooked.

• Fingerlings—are thumb-sized potatoes that grow to about 3 inches (7.5 cm) long and 1 inch (2.5 cm) wide. Fingerlings are thin-skinned and can be cooked unpeeled—baked, boiled, steamed, fried, and roasted. They are low in starch with a waxy texture and hold together well after cooking. They are yellow-fleshed with a rich, buttery texture.

• Yellow potatoes—are usually round to slightly oblong-shaped potatoes with thin, yellowish light brown skins, and buttery yellow to golden waxy flesh. Yellow potatoes are low to medium in starch and have a moist, creamy, succulent texture with a buttery flavor. They are well suited for boiling, steaming, mashing, roasting, grilling, and au gratin dishes.

• Round white potatoes—are medium-sized, round with a light tan to freckled brown skin and waxy to creamy textured flesh. Round whites are moist with low to medium starch. They are well suited for boiling, roasting, frying, and mashing. Round whites hold their shape after cooking.

Round whites are grown mostly in the Northeastern United States. Round white varieties include Kennebec, Superior, and Atlantic.

• Round red potatoes— also called new potatoes (because they are small), red bliss potatoes, and boiling potatoes–are medium-sized, round, rose to reddish-brown skinned potatoes with a dense, crisp white flesh. Round reds are low in starch and are sweeter tasting than round whites. Choose round reds for boiling, roasting, grilling, sautés, stews, salads, and au gratin dishes. You can serve round reds cooked whole.

Round reds are mostly grown in the Northwestern United States. Round red varieties include Red Norland and Red Pontiac.

• Purple potatoes or blue potatoes—are heirloom potatoes with grayish blue to purple skins and usually inky blue flesh. They are delicately flavored. Purple and blue-skinned potatoes are low in starch and can be boiled, steamed, roasted, fried, mashed, or served in stews, salads, and au gratin dishes.

Blue and purple potatoes are probably descended from the original potatoes from Peru which were the same color. Purple flesh potato varieties include All Blue, which is dry and good for roasting; Purple Peruvian which is well fried; and Purple Viking which has good flavor and is good mashed.

• Other heirloom potatoes–include two red-skinned and red-fleshed potatoes: Huckleberry and Blossom. Both of these potatoes are low in starch and can be boiled, steamed, roasted, fried, mashed, or served in stews, salads, and au gratin dishes.

New potatoes often come to market in the spring and early summer. They are never kept in storage because of their high sugar content. New potatoes are great for cooking whole, boiling, or pan roasting. They keep their shape after cooking and are well used in potato salads.

Storing potatoes or storage potatoes–come from mature plants whose leafy tops have yellowed and died back. Storing potatoes should be dried or cured before they are stored. Potatoes are usually cured for a period of 4 to 5 days at about 60-70ºF (16-21°C). Curing allows cuts and surface injuries of the tuber to “heal.”

Well-matured potatoes without defects are the best keepers. Potatoes should be stored in a cool, dark, well-ventilated area. Potatoes can be stored for up to 6 months.

More tips at How to Grow Potatoes. 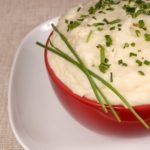 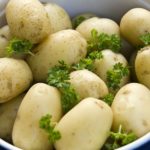