Potato growing success can be had with well-drained, deep, sandy loam containing plenty of humus paired with cool, moist conditions.

Plant potatoes in early spring after the danger of frost has passed. Use disease-free seed potatoes; cut each potato so that two eyes are on each piece.

Even under these ideal growing conditions, potatoes are not always problem free.  Potatoes are susceptible to a host of setbacks.

Here is a list of possible potato growing problems matched with cures and controls:

• Plants do not emerge after planting seed pieces. Most store-bought potatoes are treated to prevent sprouting. Plant only certified seed potatoes. Cut seed potatoes when sprouts form, two eyes on each piece, and plant immediately. Plant when the soil has warmed to 45°F or greater.

• Plants are eaten or cut off near soil level. Cutworms are gray grubs ½- to ¾-inch long that can be found curled under the soil. They chew stems, roots, and leaves. Place a 3-inch paper collar around the stem of the plant. Keep the garden free of weeds; sprinkle wood ash around the base of plants. Use oakleaf mulch. Companion plant tansy between rows.

• Large holes in leaves, leaves and shoots are stripped. Colorado potato beetle is a humpbacked yellow beetle ⅓ inch long with black stripes and an orange head. Handpick off beetles. Keep the garden free of debris. Spray with a mixture of basil leaves and water. Companion plant with eggplant, flax, or green beans.

• Young sprouts fail to grow or die back. Blackleg, black scurf, or frost damage. Blackleg is a bacterial disease which leaves sprouts rotting at soil level–“blacklegs.” Black scurf is a fungal disease; stems will have brown sunken spots below the soil level. Remove infected plants and destroy infected tubers. Frost damage follows a frost; wait until after the last frost to plant.

• Leaves are yellowish and slightly curled with small shiny specks. Potato aphids are tiny, oval, pinkish to greenish pear-shaped insects that colonize on the undersides of leaves. They leave behind sticky excrement called honeydew which can turn into a black sooty mold. Spray away aphids with a blast of water from garden hose. Use insecticidal soap.

• Leaves are chewed. Blister beetles are long, slender reddish-bronze colored beetles with red-coppery legs that feed on leaves. They secrete oil that can cause the skin to blister. Wear gloves and handpick them from leaves and destroy.

• Leaves turn pale green, yellow, or brown; dusty silver webs on undersides of leaves and between vines. Spider mites suck plant juices causing stippling. Spray away with a blast of water or use insecticidal soap or rotenone. Ladybugs and lacewings eat mites.

• Gray blotches on older leaves; tunneling in leaves. Potato tuberworms are small caterpillars, the larvae of a moth that lays eggs on foliage. They tunnel through interior of leaves. Handpick and destroy. Hill up soil over tubers to keep worms from reaching tubers.

• Plants are green topped, no tubers. Temperatures are too warm. Potatoes require cool nights below at about 55°F for good tuber formation. Plant so that tubers mature in cool weather.

• Leaves turn yellow and then brown from the bottom up; plants lose vigor; plants appear stunted; stems, roots, and tubers have tunnels. Wireworms are the soil-dwelling larvae of click beetles; they look like wiry-jointed worms. Check soil before planting; flood the soil if wireworms are present. Wireworms can live in the soil for up to 6 years. Remove infested plants and surrounding soil.

• Leaves and stems have irregular grayish brown water-soaked spots or rings; gray-white growth appears on the underside of leaves. Tubers have brown-purple surface scars; tubers rot in storage. Late blight is caused by fungus that infects potatoes, tomatoes, and other potato family members. It favors high humidity and temperatures around 68°F. Keep the garden free of all plant debris and avoid overhead irrigation. Remove volunteer potatoes before planting. Plant certified seed potatoes and resistant varieties such as Kennebec, Cherokee, and Plymouth. Keep tubers covered with soil. Cut vines 1 inch below the soil surface and remove vines 10 to 14 days before harvest. Do not harvest under wet conditions.

• Leaves curl upward: older leaves turn yellow, then brown; young leaves show purple margins. Nodes and petioles are enlarged. Tubers may be visible. Plant may turn brown and dry. Potato psyllid is light gray-green to dark brown or black winged insects about the size of an aphid; they are flat and disk-like before plumping up at maturity. They inject a toxin into leaves as they feed causing the plant to yellow. Use yellow sticky traps to control psyllid.

• Tiny bumps on tubers, brown spots on tuber flesh. Nematodes are microscopic worm-like animals that live in the film of water that coats soil particles; some are pests, some are not. Pest root nematodes feed in roots and can stunt plant growth. They are more common in sandy soils. Rotate crops. Solarize the soil with clear plastic in mid-summer.

• Leaf tips and margins yellow, gradually brown and die; tubers have irregular brown spots throughout flesh. Lack of moisture or inconsistent moisture during hot, dry weather. Place 2 to 3 inches of organic mulch across planting bed to conserve soil moisture. Deep water potatoes 2 to 3 hours at a time; do not water again until the soil has dried to a depth of 4 to 8 inches.

• Older leaves yellow and die; brown streaks on lower leaves stems split lengthwise; stem end of tubers discolored around eyes. Verticillium wilt is caused by a soil fungus. It favors cool soil and air temperatures. Avoid planting where tomatoes, potatoes, peppers, eggplant, and cucumber family plants have been recently growing. This disease is most evident in hot weather when the plant is loaded with fruit and water is short. Plant resistant varieties: Houma, Cariboo, Red Beauty. Bacterial wilt also can cause these symptoms; black-brown ooze seeps from cut stems.

• Tubers have brown streaks and roots are growing from inside tubers. Nutsedge is a perennial weed that grows in many potato growing regions. The weed’s rhizomes will penetrate potato tubers. Keep potato plantings free of nutsedge. Nutsedge tends to grow in areas that are not well drained.

• Pink areas around eyes of tubers. Pinkeye occurs on tubers in wet soil. The cause of pinkeye is not known. Plant in well drained soil.

• Irregular black and brown spots to ½ inch in diameter appear on lower leaves and stem; leaves turn yellow to brown; tubers may have brown, corky, dry spots. Early blight is a fungal disease spread by heavy rainfall and warm temperatures. It is seen near the end of the season when vines near maturity. Keep weeds down in the garden area; they harbor fungal spores. Destroy infected plants. Avoid overhead watering.

• Rough, scabby or corky spots on surface of tubers. Scab is caused by soilborne bacterium. Disease can be cosmetic. Modify soil to a pH of 4.8 to 5.2; work sulfur into the soil to make it slightly acid and reduce disease. Plant resistant varieties: Alamo, Arenac, Cherokee. If scab occurs, change varieties next year. Use long rotations.

• Green tubers. Tubers have been exposed to the sun during growing or after digging; sun causes tubers to form chlorophyll green spots. Keep growing tubers covered with soil. Do not eat green sections of potato tubers they contain toxins; cut away the green sections before using. Store potatoes in complete darkness.

• Cavities at the center of the potato, hollow center. Hollow heart occurs when potatoes grow too fast because as a result of too much water or too much fertilizer. Cavity can be discolored and lined with powdery decay, verticillium fungus. Cut away the brown areas before using. Fertilize plants early when tubers are about to form. Avoid planting varieties that develop hollow heart: Chippewa, Katahdin, Mohawk, Irish Cobbler, Sequoia, Russet, White Rose.

• Large shallow hole in tubers. Grayish white grub is the larvae of the Japanese beetle, a shiny metallic green, copper winged beetle to ½-inch long. Grubs feed on potato tubers. Cut away damaged areas and use the rest of the tuber. Handpick grubs and beetles. Use pheromone traps to control beetles. Spray with pyrethrum or rotenone.

Sulfur applied to the garden may reduce rots. Protect tubers from injury.

Planting. Grow potatoes in full sun. Potatoes require well-drained soil rich in organic matter. Prepare planting beds with aged compost. If drainage is an issue, plant potatoes in raised beds. Plant seed potatoes grown specifically for crop growing. Keep the base of potato plants and tubers shielded from light and pest injury; use soil or mulch to cover plants. Plant seed potatoes in a 4-inch-deep trench and cover the seed with 2 inches of soil; as the plants grow continue to hill up loose soil around the plant eventually mounding the plants. An alternative planting method is to set seed potatoes on the soil surface and cover them with mulch–shredded leaves or straw. Continue to add mulch as plants grow through the season always keeping tubers well covered. This method can be used where the soil is heavy, clay-like, and not well-drained; however, the yield will be less.

Planting time. Potatoes grow best where the soil temperature is at least 50°F. Potatoes are usually planted in spring as early as 3 weeks before the last expected frost. Planting time can vary to avoid hot, dry conditions and to minimize disease and pest problems.

• In moderate temperature summer regions, plant one crop in late spring or midsummer for fall harvest. If you plant in midsummer, choose an early harvest variety.

• In long warm and humid summer regions, plant three crops: one in late winter for late spring harvest; a second fast-maturing crop in mid-spring; and a third late summer crop for a fall harvest.

• In regions where there is little or no frost, plant in fall when the heat subsides for a late spring harvest (plants will go dormant in winter and begin growing again in early spring).

• In mild winter and desert regions, plant in the fall for spring harvest, or plant an early-harvest variety in early spring.

Care. Potatoes are shallow rooted and require consistent, even watering from planting time until tubers are fully developed. Do not let the soil go dry during the growing season. When the foliage starts to yellow at the end of the growing season, stop watering so that the tubers do not rot. Keep tubers well covered with soil or mulch from planting to harvest; light, temperature fluctuations, and exposure are responsible for many potato disease and pest problems. Crop rotation will shield potatoes from many soilborne diseases and pests.

Harvest. Harvest “new potatoes”–young, small tubers–when plants are blooming; lift the full plant and its tubers. Mature potatoes can be harvested when vines die back on their own; if vines do not die back, cut the vines at soil level 2 weeks before you want to lift the tubers–this will cause the tubers to harden.

More tips: How to Grow Potatoes. 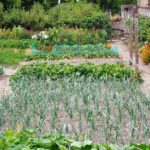 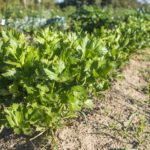