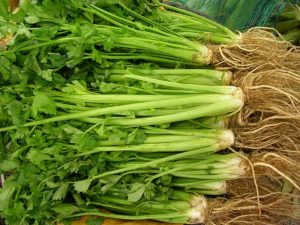 Can you remember what you were doing 4 months ago today?

Well, if you are a bunch of celery, you were probably just getting your start on life, germinating as a little seed.

And today, you are ready to make an appearance on a snack tray, in a salad or a soup.

Most varieties of celery take about 115 days to mature from seed. Since celery grows best in cool weather and especially enjoys cool nights, the first crops go into the ground two to three weeks before the average date of the last frost in early spring. With an early spring start that means the final celery harvests should be taking place during the final days of early summer—which is now.

Choose. Everyone likes a little snap in their celery. So here’s a tip for picking up the best bunch at the farm market this week: The best way to shop for celery is by sight. If the bunch you have your eye on is well-shaped and looks fresh, it’s probably a good bet. If it’s limp and pliable, if the leaves are wilted or yellow, or if the stalks look pithy or woody, pass that bunch by. If you want to choose your celery like a pro, lightly pull apart the stalks and check the center to see if an overgrown seed stalk has developed. If so, choose another.

(Now, here’s a really advanced celery buying tip: Local celery at the farm market should be fresh, but not all celery is local. Some retailers may keep weary celery looking fresh by “butting.” Here’s how it works: as celery–and lettuce–grow old, the butt end gets browner and will eventually turn black. To keep the bunch looking fresh, the retailer will slice off the dark butt end and remove the wilted outer stalks. This might go on until there is almost no butt at all. If you suspect the celery you are choosing has been butted, remember: the nose knows. That’s right, when in doubt, smell for freshness!)

The bottom line is that celery should have a mild sweet taste. Local or home grown celery will always have more flavor than commercial stalks.

Green and golden celery. Celery is classed by color: green varieties and golden varieties. Green varieties include Utah which is stringless and has a nutty flavor and Summer Pascal which is darker green and tender hearted. Interestingly, almost all green celery is lumped together and called Pascal by grocers. Golden celery has yellowish leaves and stalks and is the standard in France. The most popular golden variety is called Golden Self Blanching which is stringless and succulent.

When all is said and done, celery is a good source of two essential minerals, sodium and potassium, and it is perfect for dieters, just 8 calories in one large outer stalk and fewer for inner stalks.

You can boil, braise, fry or bake celery. And, of course, you can eat it raw.

Celery Water. Now, try this: those leafy tops you were about to toss out: boil and strain them, chill the liquid and drink up. It’s refreshingly tasty by itself or combined with other vegetable juices. 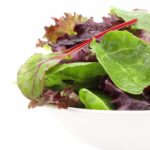