There are three ways to get your vegetable garden growing:

Starting seed indoors will give you:

Crops best started from seed in the garden.

Some crops are not easily transplanted to the garden. These crops simply want to be handled as little as possible; they are too small or too delicate as seedlings to be moved from one place to another. And when it comes to thinning, it’s best to simply cut the thinnings of these crops off at soil level rather than lift them from the bed. Start these crops from seed in the garden:

Crops best started from seed indoors and later transplanted to the garden.

Some crops do poorly in outdoor germination conditions–the soil or air temperature must be optimal for success. Started indoors these crops gain the strength necessary to do well in the garden.

Cool-weather members of this group need a head start indoors because they must reach maturity when the weather is cool, before spring turns warm. But the cold air and soil temperatures of late winter are too cold for them to begin growing. Start these crops indoors and set them in the garden to come to maturity before it gets hot.

Warm-weather members of this group generally take 100 or more days to reach harvest. Started from seed in the garden when the weather is finally warm enough (temperatures consistently in the 60s or above) they are likely to run out of growing season or hold space in the garden that could be used by quicker-maturing cool-weather crops earlier in the season. They are best transplanted into the garden when the soil and air temperatures are right. Started indoors these plants will be well developed when they go to the garden; you won’t have to thin these plants. These crops include:

Crops that can be started indoors or outdoors.

Some crops start outdoors just as well as they will start indoors. They are not finicky. Cold climate gardeners–gardeners with short growing seasons–often add these crops to those started indoors. The indoor start allows these crops to go into the garden as soon as the soil is workable (with the exception of corn–which will prefer to wait until outdoor temperatures are consistently in the 60s or above).

Crops that can be started directly in the garden or individually in biodegradable containers to product their sensitive roots.

Several warm-weather crops do not like being transplanted–their roots are too sensitive. These crops are best started directly from seed in the garden or started in individual containers such as biodegradable peat pots or newspaper pots which can be set in the garden with the plant. If you do start these crops in plastic pots avoid bending or squeezing the root mass when you transplant them to the garden. If you sow these crops directly in the garden, thin extra seedlings by cutting them off even at the soil level rather than lifting them and disturbing the roots of the seedlings nearby.

Crops that can be started easily indoors.

First-time seed starters should start with seeds that are easy to germinate and seedlings that can withstand transplanting. If you want to gain experience starting vegetables indoors and avoid first-timers’ frustration, start with any of these crops:

Plants not started from seed.

Not all vegetables are started from seed. Root divisions, cuttings, and cloves are used to get some vegetables started. Most of these crops are best started directly in the garden, but many can also be started indoors and transplanted out:rtichokes: start from root divisions. 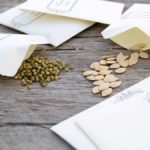 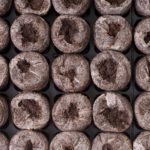