Late blight is the most serious of the three. It spreads rapidly and will likely destroy the infected plant and can quickly spread to other plants—including potatoes, eggplants, and peppers.

Here are basics for identifying these fungal diseases:

Early Blight: symptoms appear first on older, mature leaves near the base of the plant–one or two spots per leaf, spots ¼ to ½ inch in diameter; spots have tan centers with concentric rings and yellow halos around the edges, target-shape appearance with defined border; spots enlarge and coalesce. Large portion of leaf becomes a diffuse yellow and may drop. No mold appears. Disease spreads slowly.

Late Blight: water-soaked spots show first on lower leaves; spots start out pale green diffuse irregular spots on upper side of leaf, usually near the edges of tips of leaves; spots turn brown to purplish-black and velvety with pale green border on underside of leaf; spots appear on young leaves at the top of the plant; spots look water-soaked; no concentric rings or defined border around necrotic spots. In humid, wet conditions, a fuzzy ring of mold around spot appears on the undersides of leaves. Leaves shrivel, turn brown, and die. Disease spreads rapidly.

Leaf Spot: numerous brown spots appear on the leaves 1/16 to 1/4 inch in diameter; spots are circular with dark brown margins and tan to gray center–a black speck in the center; spots do not have a yellow halo. Disease spreads upwards from oldest to youngest. Leaves turn slightly yellow, then brown, then wither.

Late Blight: black and brown lesions appear on stem and petioles; when petioles or leaf stalks are affected, entire leaf can collapse; entire vine or plant can quickly collapse and die in period of high humidity.

Leaf Spot: fruit is usually not affected; sunscald may occur as a result of leaf loss above.

Early Blight: remove lower leaves after first fruit sets; then remove affected leaves as they appear; plant in a different location next year.

Late Blight: pull and destroy the plant as soon as you know its late blight; select resistant varieties to plant in future; plant in a different location next year. 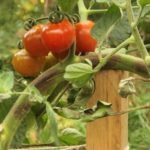 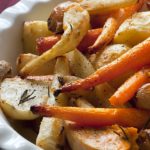