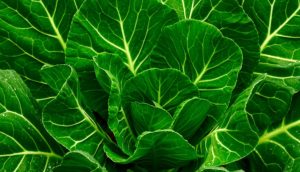 If you'd like to add a little spice to a salad try a bit of fresh chopped or shredded collards. As well, cooked collards can be added to soups and stews.

Collards can be steamed, braised, and stir-fried. Combine collards with mashed potatoes, sweet potatoes, or beans and puree. Steamed, collards are a good match for smoked pork.

You can find collards fresh and locally grown from mid-winter through spring, December through April in the Northern Hemisphere.

There are many ways to serve collards. Here are a few:

Collards is a type of kale with large smooth-leaves that resembles a cabbage, but unlike the tight-headed cabbage, collards forms a very loose leafy head. The thick leaves are paddle shaped with either flat or curly edges depending upon the variety. Collards grow to about 18 inches (45 cm) tall, and the leaves have thick veins and a tough, white central rib extending from a pronounced stem.

Collards has a very strong cabbagey flavor and is considered substantial enough in taste and texture to replace meat. The plant is a common kitchen vegetable in cultures as diverse as Portugal, Ethiopia, Kenya, Jamaica, Brazil and India. 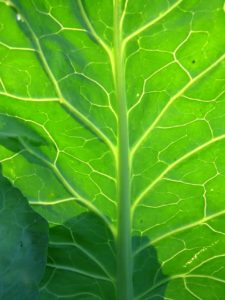 Collard leaf early in the season

Store. Collards will keep in the refrigerator for 2 or 3 days. Wrap them unwashed in a damp paper towel and place them in a perforated plastic bag. The longer they are stored the more bitter tasting they will be. Wash collards thoroughly just before using.

Serve. Prepare collards like you would spinach. Collards can be steamed, braised, stir-fried, sautéed or added to soups.

After washing collards thoroughly, separate each leaf from the central rib–which is unpalatable unless the plant is young and tender. Stack or bunch the leaves and then cut them into strips.

To moderate the strong flavor and fibrous texture collards, blanch them for 5 minutes or more before cooking depending upon the toughness of the green.

Nutrition. Collards contain about 30 calories per cup cooked and are an excellent source of folic acid and vitamin A, and contain quantities of potassium, calcium, iron and zinc.

Collard facts and trivia. The name collard, like the name kale, is said to derive from the Greek word kaulos which means stem. In the 1600s in England, the word kaulos had become ‘cole’ in reference to those plants that formed heads—which we now call kale (the Scottish name) and cabbage. Coles that did not form heads or were pulled from the garden as thinnings to make room for stronger heading plants were called colewort. Through dialect corruptions over the next few hundred years, colewort became collart and collart later became collard.

Collards in the United States are most popular in the South where they were introduced into culinary use by African slaves brought there before the American Civil War. Collards—which are hardy to 5°F (-15°C)–were an important food in the months from January to April when there was no cabbage harvest.