There is curly endive and then there is frisée. They are the same, but they are not.

Frisée—pronounced free-ZAY—is a petite, pale curly endive produced by blanching. It has an opened, flattened shape. Its leaves are frizzy and finely cut, yellow-white to yellow-apple green in color.

Frisée has a bittersweet taste and it’s tender on the tongue unlike other curly endives. Frisée will spice up a salad mix or add a bit of zing to a light entrée such as fish.

Fall is the time that frisée comes to market. Although it is one member of the chicory family that can be harvested during the summer, like other chicories and endives too much warm weather and sunlight can make frisée overly bitter.

Bitter is not the ideal taste when it comes to frisée. Rather peppery is how a good frisée should taste.

Both frisée and plain leafed endive belong to the leafy vegetable group of peppery tasting plants that are often grown specifically for fall and winter salads. Joining frisée in this group are mustard, garden and pepper cress, watercress, arugula, chicory and radicchio and corn salad or mache. These peppery to slightly bitter greens—when judiciously used—can turn around a salad that is bland and uninteresting.

Now, frisée is not exactly the same vegetable that comes to market as chicory, curly chicory, and curly endive, although it is exactly the same plant, Cichorium endivia. Here’s the difference: When curly endive is about three-fourths grown—about 30 days from seeding—the plant is covered and pressed and hidden from the sunlight: sometimes with boards, sometimes with cups. That’s the way it stays until the plant attains exactly the right paleness and tenderness.

Because blanching requires extra time and extra effort on the part of the grower, you can expect to pay about twice as much for frisée as you would pay for baby lettuce.

At the market, choose frisée with crisp leaves, not wilted. You can keep frisée in a plastic bag in the refrigerator for up to 5 days.

In Lyon, France they cut up frisée, toss it with warm bacon and vinaigrette dressing, then top with a poached egg. Voilà, a Lyonnaise salad! 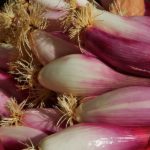 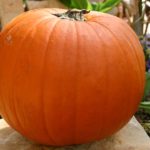