The corn earworm—which is also known as the tomato fruitworm and the cotton bollworm—is a caterpillar that eats the fruit and leaves of corn, tomatoes, beans, peppers, squash, lettuce, peas, potatoes, and other crops.

Corn earworms follow corn silks into the tips of husks and chew their way through the kernels. As tomato fruitworms they bore into the stem ends of tomatoes and peppers and tunnel into bean pods and lettuce heads. Besides chewing crops they leave behind excrement which hosts mold and pathways for rot organisms to follow. At their least destructive, corn earworms chew leaves and buds leaving plants disfigured and stunted. By eating corn silks they inhibit pollination.

Handpicking, insect traps, and drops of suffocating mineral or vegetable oil are the least invasive controls for corn earworms. Bt, Bacillus thuringiensis, or a dusting of Sevin will slow heavy infestations.

The corn earworm, Heliothis zea, is the larvae of a night flying moth. Neither the earworm nor the moth is easy to spot; they live and eat mostly out of sight.

Corn earworms life cycle. There are commonly four generations of corn earworms each year, more in regions where the summer is long and the winter mild. The corn earworm pupa passes the winter in the soil of mild winter regions. The moth emerges from the pupa in spring and lay eggs on plants. Earworm caterpillars emerge from the eggs and feed on foliage and fruits for about four weeks then the larvae drop to the soil and pupate. After a brief rest, the second generation emerges. Adult moths are carried on the wind to regions north of where they emerge from pupa in winter. The pupa does not survive in cold winter regions.

Description of adults. The adult corn earworm is a night-flying moth with bright green eyes and brownish or olive wings. The moth has a wingspan of 1½ inches with a dark blackish spot at the center of each fore wing. The moth lays single eggs on the underside of leaves. Moths lay eggs daily over the course of their lifespan.

Eggs. The moth lays single eggs on the undersides of plant leaves or tips of corn ears. Eggs are light brown or yellow, domed, and ridged. The eggs hatch in three days. 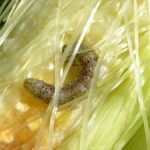 Larvae. The corn earworm is a yellowish to green and sometimes red caterpillar with a yellow-brown head and four pairs of prolegs. It can grow to two inches long and has lengthwise stripes and short spines or bristles on its body. The earworm chews on buds and eats large ragged holes out of tender, unfolding leaves. The caterpillar burrows into tomatoes and peppers, into lettuce heads, and move down ears of corn eating kernels. The larvae feed for two to four weeks then drop to the ground and pupate in the soil. Adults emerge in 10 to 25 days.

Detection. The best way to detect adult moths is to set floral lure traps. To detect larvae inspect leaves for damage or fruits and pods for signs of tunneling.

• Attract predators. Plant small flowered perennials such as dill, parsley, and yarrow and annuals such as alyssum around the garden to attract parasitic wasps which parasitize earworm eggs. The Tachnid fly is also an earworm predator.

• Plant early. Plant early and early-maturing varieties of corn and tomatoes. Adult earworm moths will not arrive or emerge until the weather has warmed, by then early planted crops will be maturing and not suffer significant earworm damage as the pest population peaks.

• Traps. Use insect traps with a floral lure to attract and trap moths.

• Block entry. Earworms enter corn ears along the silks. Block earworms from entering by wrapping a rubber band and clamping a clothespin around the tips of husks.

• Suffocate with oil. When corn silks begin to turn brown, earworms start to crawl down the silks into the ears. Use an eyedropper to apply five drops of mineral or vegetable oil to the silks of each ear. The oil will smother the earworms. Do not apply the oil too early or it will interfere with pollination and result in poor kernel development. The oil will not affect the taste of the kernels.

• Kaolin clay spray. Spray fruiting plants with kaolin clay to discourage moths from egg-laying. Kaolin clay coats plant leaves and fruit and disorients and repels pests but does not interfere with photosynthesis. Wash away the clay before eating fruit or pods. Don’t use kaolin clay on lettuce or leafy crops.

• Sevin. Dust corn silks with Sevin, an insecticide containing carbaryl. Treat when silks first emerge and continue to treat every three to five days until the silks turn brown.