April is a month of quick transition in the the kitchen garden. The last frost will come this month in warm-winter regions. True spring has already arrived in most southern and coastal gardens.

If the lilacs are in bloom in your area, the time has come to sow directly in the kitchen garden. Successive cool-weather crops can go in the garden now in many regions–the first sowing were last month, and by the end of April, in the warmest regions, you can transplant out tomatoes, eggplant, and other warm-weather crops.

The timing of planting is important in the kitchen garden. Frost and cool weather can harm warm-weather crops sown or transplanted out too soon. But cool-weather crops should thrive now. If you are looking to get the most out of your kitchen garden, successive plantings of crops is a way to extend the season. Plant leafy greens and root crops as early as possible and then replant every week to 10 days. Quick-maturing crops are best for successive planting: lettuce, radishes, spinach, chard, peas, beets, and carrots in cool weather, and later string beans and sweet corn.

Do not rush planting warm-weather crops in the garden: beans, cucumbers, eggplant, peppers, squash, and tomatoes. But getting these started indoors now for transplanting out at the end of the month or in the first week of May is a safe bet. Get growing!

Here is a kitchen garden guide for warm regions–growing zones 7-11–for the month of April.

□ Continue to sow in cold frames or beneath cloches in areas where frost may still come. Use horticultural fleece or floating cloches for early corps already in the garden if you don’t have conventional cloches.

□ Make successive sowing at 10-14 day intervals of beets, carrots, lettuce, turnips, runner beans, green beans, endive, radishes, and kohlrabi. By the end of the month, you can plant outdoor tomatoes, and tie them gently, but firmly, to stakes to secure them. Support peas with stick or netting. For sweet corn, several short rows in a rectangle will pollinate and be more successful than a few long rows.

□ Feed seedlings with manure or compost tea after planting. Soak compost or well-rotted manure in water. You can use the resulting “tea” as a liquid fertilizer. Celery should be fed about 3 weeks after plants are setout. Keep celery moist by regular irrigations. Black heart celery disease is caused by alternate drying and wetting of soil.

□ Watch for pests and signs of disease. Watch out for aphids on broad beans and root flies on cabbages, carrots, and onions. Pinch out the tips on broad beans to encourage good pod set and to deter attack from aphids. Remove rhubarb flowers as soon as they appear, before they rob the plants of food and energy. Water garden if weather is dry. Weed as needed. Turn compost pile.

□ Tie new canes of blackberries and hybrid berries to support wires. Allow a maximum of eight canes per plant. Summer-prune gooseberries by cutting back side shoots to five leaves. Fasten grape stems to training wires.

□ Plant new strawberries. Remove flowers from newly planted strawberries to prevent fruiting in their first year. Pinch off runners on new strawberry plants. Put cloches over strawberries in frosty regions if you want an early corp. Allow access for bees. Cover berries with netting to keep away birds.

□ Thin citrus fruit, apples, and peaches. Thin heavy-cropping nectarines and peaches when fruit is ½ in (1-1.5 cm) in diameter. Protect open flowers from frost damage by draping muslin or horticultural fleece over trees at night. Mist open peach flowers with a fine spray to help the setting of fruit.

□ Prune fruit trees cutting out crossing branches. On fan-trained apples, cherries, peaches, and plums, remove branches growing towards or away from the wall.

□ Check for pests and diseases. Watch for signs of fire blight; prune affected branches and dispose of them. Watch for borers and caterpillars on trees. Hang coddling moth traps on apple trees. Spray against apple scab, mildew, and aphids.

□ Plant greenhouse tomato plants in large pots, or plant them in grow bags. Water and feed tomatoes, cucumbers and peppers, never letting the soil dry out. Attach slings or nets to melons as they swell. Continue to remove side shoots from tomatoes. Use biological pest control for greenhouse pests such as greenhouse whiteflies and spider mites. Ventilate the greenhouse and cold frame on mild days.

North and East and Midwest:

□ Where the weather remains cold or snow is still on the ground, sow early cabbage, cauliflower, celery, tomatoes, radishes and peppers in hotbeds, cold frames, and greenhouses. Get these crops started indoors for transplanting later.

□ Mid-month when the soil begins to warm and is workable, prepare planting beds. Then sow hardy crops. Sow asparagus seed or set out roots in the garden. Sow cabbage and cauliflower in a sheltered spot. Set out horseradish, winter onions, and rhubarb. Dig up over-wintered parsnips.

□ After the middle of the month, sow indoors warm-weather crops: beans, corn, cucumbers, melons, potatoes, and squash can be planted in mid-month.

□ In regions where the last frost occurs between April 1 and April 20, warm weather crops can be planted this month. These crops can be started indoors for transplanting out at the end of the month, or wait and direct sow these three weeks after the last frost: bush and pole beans, lima beans, corn, Chinese and Armenian cucumbers, eggplant, okra, peppers, summer squash, and tomatoes.

□ In regions where the last frost comes between April 10 and May 20: cool weather crops can be sown now: leafy greens and root crops, asparagus, parsley, and Chinese cabbage. Start warm weather crops inside early this month: cucumbers, peppers, tomatoes to be set out in late May and early June.

□ Toward the end of April almost all plants can be sown or set out. Early in the month, resist planting if the soil is still cold and wet. When the soil can be worked plant asparagus roots, beets, broccoli, carrots, cauliflower, celery, chard, lettuce, parsnips, peas, early potatoes, radishes, salsify, spinach, turnips, radishes, rhubarb. At the end of the month, start warm-weather crops indoors for transplanting out in May: beans, cucumbers, eggplant, peppers, tomatoes, and squash. 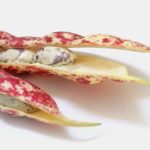 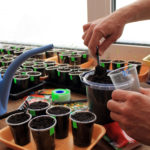