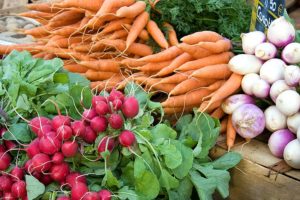 Leafy greens, root vegetables, and members of the cabbage family are good fall harvest crops. These crops can be planted in mid- to late-summer for fall harvest.

Summer cabbage, cauliflower, broccoli, Brussels sprouts, Florence fennel, endive, escarole, and collard greens are crops for fall harvest that are best started indoors and later transplanted out into the garden. Start these crops indoors in early summer for mid- to late-summer transplanting into the garden. (These crops can also be purchased as starts from a local nursery.)

Cooling and cold weather enhances the flavor of many crops coming to harvest in autumn as plant metabolisms change with cooler temperatures. Sugars accumulate in plant tissues of cool-weather crops as temperatures decline and crops become sweeter flavored. Leafy crops such as lettuce are sweeter tasting in cool weather. Brussels sprouts, kale, and parsnips are noticeably more flavorful when exposed to cooler temperatures and even frost.

Planting date. To calculate the planting dates for fall harvest crops, determine the first average frost date in your area; count back the number of days to maturity for each crop you plan to sow or transplant; add an extra week or two to the maturity time allowing for cooler temperatures and shorter days which slow plant growth. For example, sow broccoli three months before the first expected hard fall frost.

An added advantage to mid- to late-summer planting is the decline in weed growth and a decline in insect pest populations with cooling temperatures.

Planting. Direct sow seeds in summer in the cooler part of the day when water will not quickly evaporate. Seeds and transplants should be watered thoroughly after planting; seedlings should be protected from harsh summer sun by shade cloth until average daytime temperatures begin to cool.

Plant crops for fall harvest in blocks instead of rows. Crops planted in blocks are easier to keep watered and as plants mature their leaves will shade the soil and slow evaporation.

Harvest. Keep a calendar or notebook with planting dates and expected harvest dates to ensure you harvest your crops at their peak.

When frost is expected, be prepared to lift crops from the garden before they are damaged or place frost protection–such as frost blankets or plastic tunnels–over crops before a freeze occurs.

Carrots, leeks, parsnips, and turnips can be left in the late autumn and winter garden until needed; these crops should be protected by a one- to two-foot layer of mulch when freezing weather arrives. These crops should be harvested before the soil freezes solid. 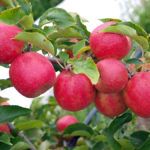