Horticultural cloth draped over plants will exclude beetles from reaching plants to lay eggs and feed, diatomaceous earth will destroy larvae, and the botanical poisons pyrethrum and rotenone can kill heavy infestations of adult beetles. However, where Colorado potato beetles are well established complete control may be nearly impossible; one female can lay 10,000 eggs in a season.

The Colorado potato beetle (Leptinotarsa decemlineata) is yellow with black stripes on its wing covers and has dark spots just behind its head. The beetle grows to ⅓ inch long. The females lay orange eggs in rows on the underside of leaves. The larvae are humpbacked and plump, red with black legs and black spots on each side.

Colorado potato beetles have a life cycle of one to three generations per year, but many adults can live for two full years, overwintering in the soil. They can first be spotted in spring as soon as potatoes sprout in the garden. They will stay on in the garden through flowering and harvest unless controlled. Both adults and larvae feed on leaves; the larvae are most voracious eaters.

There are several defenses against Colorado potato beetles:

• Timed planting: Plant potatoes about one month earlier or later than you otherwise might that way the plants are either mature or have not yet emerged at the time the beetles emerge in spring. Potatoes generally are planted in spring when the soil temperature reaches 50°F.

• Straw mulch: A thick layer of straw mulch—at least 4 inches—can make it difficult for beetles to find seedlings or plants.

• Row covers: Beetles can be excluded when crops are protected by row covers at planting time. Seal the edges to make sure beetles cannot get in or are not trapped inside the cover.

• Handpicking: Beetles and larvae can be handpicked off leaves and destroyed in can of soapy water. Check crop leaves twice a week for eggs, larvae, or adults. Be sure not to pick off lady beetles or their eggs by mistake; lady beetles are beneficial to crops.

• Diatomaceous earth: Spread diatomaceous earth around plant stems and even on leaves. This fine powdery material made from prehistoric sea shells will cut up soft-bodied larvae when they crawl across it.

• Biocontrols: Apply Bt (Bacillus thuringiensis) to kill small larvae. Large larvae and adults can be killed with rotenone and pyrethrum, a strong, but short-lived botanical poisons. Spray these on crops at dusk when bees are least active; the toxins will break down in about six hours.

• Neem: Neem oil extract is a larvae toxin and repellent. It can be sprayed on plants every four days until the concentration of pests subsides. 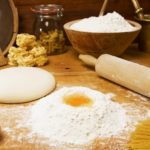