The common asparagus beetle adult is a shiny, elongated blue-black beetle with a reddish-brown thorax and four cream-colored spots surrounded by a red border on the wing covers. The adult asparagus beetle is ¼-inch long.

The larva is a greenish-gray, wrinkled, humpbacked grub with a dark head about ⅓-inch long.

Common asparagus beetle adults and larvae strip the needle-like leaves off asparagus plant fronds inhibiting the plant’s ability to photosynthesize and store energy for the production of spears. The beetles and larvae also chew asparagus spears.

Adult asparagus beetles hibernate in the soil and garden litter near plants during the winter then emerge about the time asparagus spears are about 6-inches tall—about harvest time. The adults feed then lay eggs on the spears. 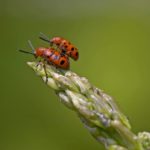 Asparagus beetle eggs are shiny and black and are found attached by one end to asparagus spears. They hatch in about one week. The larvae feed for about two weeks on spears then burrow into the soil and pupate. A new generation of adults appears about ten days later.

There are usually two or three generations of asparagus beetles each year.

Organic Controls: Wash eggs, larvae and beetles off plants with a strong stream of water. Handpick beetles and crush them.  As a last resort spray beetles with pyrethrin.

Organic Control Calendar: Here is what you can do seasonally to control asparagus beetles:

Natural Predators: Asparagus beetles are attacked by lady bugs and parasitic and predatory flies. Animal predators include chickens and ducks which can be let loose to feed in the asparagus patch before spears emerge. Songbirds that feed on asparagus beetles include Baltimore orioles, bluebirds, cardinals, and chickadees. 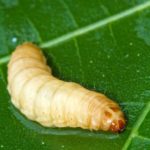 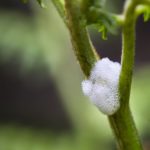