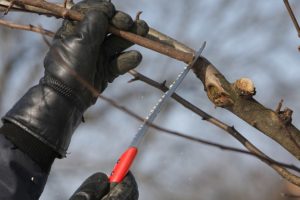 Apple trees are best pruned in winter when they are dormant.

Young apple trees can grow narrow and erect or open and spreading. At maturity, the apple tree will be spreading.

Prune young narrow and erect apple trees by cutting branches just above buds which are pointed away from the center of the tree.

Prune open and spreading apple trees by cutting above buds pointed toward the center of the tree.

Apple trees produce fruit on “spurs.” Spurs are formed on branches one-year-old or more. Spurs usually appear on the lower or inner portion of branches.

Spurs are short lateral growths that can vary in length from one to three inches. Spurs have a stubby, thick appearance. They produce blossoms and fruit year after year. For bountiful harvests, preserve spurs as much as possible.

1. To begin pruning a maturing apple tree, first cut out any dead or diseased branches. Make your cuts as close to the main branch as possible. Avoid leaving stubs that can be susceptible to disease and rot.

2. Next, cut away crossing branches that rub against one another. Also, cut away branches that swoop down close to the ground that may get in the way of cultivation and harvest.

Evenly remove past years’ growth working to allow sunlight access into the center of the tree from the top. In essence, you are shaping the tree to an open vase form. Be careful not to remove established fruit spurs or small laterals developing into fruiting spurs.

3. Cut new branch growth just on the outside of fruit spur buds. Young trees that add considerable new growth each year may require new growth to be pruned two-thirds of the way back.

Water sprouts–new green whips which grow vertical to branches–should be cut away regularly. Water sprouts are unlikely to develop into fruiting wood.

Suckers are rapid new growth from below the ground. Remove suckers as they appear. Dig down and cut suckers at their base close to the root or trunk.

If an older tree has lost branching, water sprouts can be allowed to fill in vacant spots. But it is best to head sprouts back to slow excessive growth.

4. Thin fruit from apple trees after the “June drop.” The “June drop” is a natural thinning process of all fruit trees. It is nature’s way of adjusting the crop to what the tree can bear. June drop commonly occurs sometime in the months of May, June, or July. It is best to hand thin fruit remaining after the June drop if you suspect the tree will be unable to support it.

As apple trees grow older, less pruning will be necessary if the tree has been well trained in its first years of growth.

How to Plant, Grow, Prune, and Harvest Apples 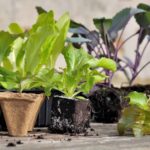 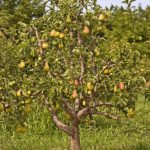