Mulch is any material laid on the surface of the soil. It can be organic, such as compost, shredded leaves, or lawn clipping, or inorganic or synthetic, such as coarse sand, gravel, or plastic.

During the growing season, mulch can slow evaporation, inhibit and control weeds, and regulate soil temperature. In winter, mulch can protect perennial plants and the soil.

• Improves soil structure by preventing erosion, compaction, and crusting. Soil erosion is decreased as the impact of heavy rainfall is reduced by mulch. Water is allowed to slowly infiltrate the soil; puddling and crusting can occur as the result of heavy rainfall or irrigation. Mulching reduces compaction when the soil is walked on and protects plnt roots and earthworms allowing them to continue their work.

• Controls weeds by making conditions unfavorable for germination of weed seed. Mulch provides a physical barrier for emerging weeds. A thick layer of organic mulch will reduce annual weeds. Mulch reduces some perennial weeds and grasses and makes them easier to spot as they emerge. The moisture below mulch will make weed pulling easier. Black plastic and newspaper are the best mulch for controlling perennial weeds.

• Moderates soil temperature. Organic mulches such as leaves and grass clippings are loose and insulate the soil keeping it cool. Apply organic mulches late, not early in the season, after the winter chill has left the soil. Synthetic mulches such as plastic will help warm the soil more quickly in spring and increase early plant development. Black plastic or clear plastic will raise the soil temperature by 5°F or more. Plastic is a good choice for protecting warm-season crops.

• Add nutrients and humus to the soil. Organic mulches are beneficial to the soil as they decompose; they improve soil tilth and moisture-holding capacity. Organic mulches are best applied after plants are well established and are at least 4 to 6 inches tall. Composted organic materials are rich in plant nutrients such as nitrogen and phosphorus and trace elements–they are not fertilizers but rich soil amendments.

Compost can be used as mulch; add 2 inches of compost to the soil and allow it to work itself into the soil. Uncomposted organic material or plant residue also will benefit the soil but requires 6 weeks or more to decompose. Use uncomposted organic materials as a sheet mulch or top layer and allow it to decompose over the course of the season, or apply it as a top layer in fall to protect the soil through winter. Apply organic mulches where there is already reasonably good soil moisture and before the weather turn hot. Rain water infiltration is slowed by mulch so it is best not to place mulch over dry soil.

• Keeps vegetable crops clean and reduces exposure to disease. Mulch prevents soil from splashing and prevents vegetables from contact with the soil. Many soilborne diseases are spread to plants in splashing soil water during rain or irrigation. Mulch reduce soil and disease particle splashing. To further protect plants, use mulch in combination with stakes and cages to lift plants off the ground. Use drip irrigation to deliver water directly to the base of plants. 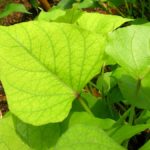 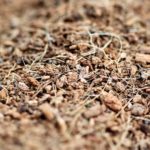