As the seasons progress there are several uses for a cold frame.

• Protect warm-temperature crops from an early frost before harvest.

• Protect cool-temperature and cold-tolerant crops for harvest through the winter.

• Over-winter cold-tolerant crops started in fall for renewed growth and a spring harvest.

• Early spring (February, March, and April), sow and germinate seed of hardy and half-hardy early crops. Sow early crops in containers or sow in the soil under the frame as soon as the soil is workable.

• Cool-season root crops can be grown from seed to harvest in the soil beneath the frame; these include beets, carrots, radishes, and onions.

• Harden off or acclimatize seedlings to outdoor conditions in the frame after they have been started in the cold frame, hot bed, or greenhouse. Ventilate the frame to gradually expose seedlings to more and more outside air and light.

• Place the portable frame over a garden bed to raise the soil temperature and improve seed germination and accelerate the growth of seedlings.

• Late spring (April and May), after cool-weather seedlings are harvested or transplanted into the open garden, sow in the frame in paper pots tender, warm-season crops including beans, cantaloupe, celery, corn, eggplant, peppers, melons, pumpkins, squash, and tomatoes.

• Late spring, harden off in the frame tender seedlings started in the hot bed or greenhouse.

• As outside temperatures warm, do not allow the frame to become overheated this will result in weak and spindly plants. Harden off seedlings with ventilation and less watering; this will condition them to withstand the shock of transplanting

• Avoid growing cool-weather and warm-weather crops in the frame at the same time; they have different temperature requirements.

• Make first, second, and third sowings of quick-maturing, warm-weather crops for growing on before setting out in the garden. Raise or remove the top to keep the seedlings from becoming overheated.

• Remove the frame sash or lid and use the frame as a nursery bed to start fall crops or perennials from seed.

• Harden off tender plants started in a hot bed or greenhouse before setting them in the garden.

• Grow hardy vegetables for winter use: cauliflower, cabbage, kale, lettuce, and spinach. Sow seeds in August or September to allow the plants to grow to near maturity before the first fall frost. When days have less than 10 hours of sunlight per day, plants will stop growing but remain crisp and viable for many weeks.

• Extend the harvest of autumn crops. Hardy crops such as leeks, kale, parsley, arugula, and other greens can make some growth with cold frame protection.

• Winter-over vegetables such as kale, cabbage, Brussels sprouts, and cauliflower for new growth in the spring.

• Place dry leaves or straw in the cold frame to store in winter root vegetables: beets, carrots, parsnips, and potatoes. Do not allow the soil to freeze. 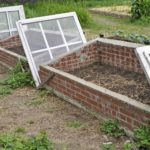