Roots supply water and nutrients to a plant. Roots also support and anchor a plant to the soil.

A root originates at the lower portion of a plant embryo or seedling. Root tips and tiny root hairs—which are not always visible to the naked eye–gather and absorb food and water from the soil. Larger roots—which are easily seen—store nutrients and water and transport them to the upper parts of the plant.

When a germinating seed sprouts, a root emerges from the lower portion of the seed and begins to grow straight down. This initial root is called the taproot or primary root. The primary root can grow several inches or more into the soil even before the plant’s developing shoot emerges aboveground.

Some plants develop lateral or side roots—roots that branch out from the original taproot; this is the case with tomatoes.

Roots hold plants in place, anchoring them to the soil. But the most important function of roots is to collect water and nutrients from the soil and to help the plant grow.

Root tips and root hairs–the youngest and most tender parts of roots—continually venture into the soil looking for water and food. Water and nutrients are absorbed by the root tips and hairs and carried to the stems and leaves through hollow cells called xylem. The pumping of nutrients and water from the roots to the stems and leaves is a result of a plant’s food making process called photosynthesis which is powered by light.

Dissolved sugars including glucose sugar which is the basic building block of plant cells and other materials produced in the leaves and shoots circulate back down to the roots and through a second system of hollow cells called phloem. The sugars combine with nitrogen and other nutrients to supply the energy that roots need in order to grow and function.

How Soil Fungi and Bacteria Interact with Roots

The roots of some vegetables and other plants may share a beneficial or symbiotic relationship with some soil fungi and bacteria.

Mycorrhiza is a structure that combines the mycelium of a fungus and the root of a plant. The fungus absorbs dissolved minerals—particularly phosphorus—from the soil and passes it over to the plant root; the plant root, in return, passes sugars and other organic compounds produced by the plant to the fungus. This is a symbiotic relationship known as mycorrhizal association.

Particular kinds of soil bacteria live in the roots of many plants in the legume family, such as beans and clover. When bacteria infect a plant root a round swelling called a nodule can form. Bacteria in the nodule consume some of the sugar produced by the plant; in return, nitrogen gathered from soil air by the bacteria are converted into nitrogen compounds that the plant root can absorb and use to feed the plant. This process is called nitrogen-fixing. These bacteria are called nitrogen-fixing bacteria. 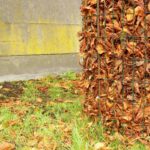 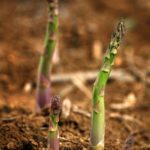