Leafminer maggots feed between the upper and lower surfaces of leaves creating tunnels or mines that appear irregular and white or brown on the surface.

Leafminer flies emerge from the soil in spring to lay eggs on the undersides of leaves or directly inside leaf tissue. The eggs are white, cylindrical and laid in clusters.

The tiny maggots emerge and feed their way through the middle of leaves for one to three weeks. When maggots finish feeding they emerge from the leaves and drop to the soil to pupate for two to four weeks. There are several generations of leafminers from spring to late summer. 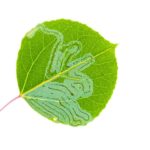 There are several species of leafminers in North America.

Spinach and beet leafminers are most active in spring when they attack young beets and spinach. By midsummer, a second species, the vegetable leafminer attacks tomatoes and other crops.

Leafminers pass the winter as cocoons in the soil.

Feeding Habits and Damage: Adults feed by sucking on plant tissue. Larvae tunnel within leaves feeding on leaf tissue and making round or winding hollow mines or tunnels. Leafminers can destroy seedlings. On larger vegetables and ornamental shrubs and trees, leafminer damage is more an unsightly nuisance than a serious problem.

Organic Controls: Cover seedlings with floating row covers to exclude leafminer flies. Pick and destroy egg clusters and mined leaves. Remove weeds such as dock or lamb’s quarters which are hosts for beet leafminers. Attract native parasitic wasps by planting nectar plants around the garden. Spray with neem as a last resort to kill larvae in their tunnels.

Organic Control Calendar: Here is what you can do seasonally to control flea leafminers: 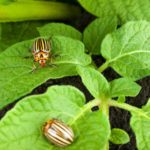 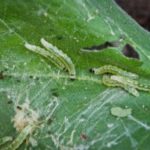