Mealybugs are very small soft, oval insects that are usually covered with a white or gray waxy fluff. A mealy bug is about 1/10 of an inch long.

Mealybugs suck the juices from citrus, apples, pears, apricots, avocadoes, and grapes as well as ornamental and tropical plants. Honeydew excreted by mealybugs supports the growth of sooty mold fungus.

Female mealybugs lay eggs in a fluffy white mass. The eggs hatch in 10 days and the crawlers then develop for 1 to 2 months. There are many generations of mealybugs each year.

Mealybugs often feed in large, dense colonies which appear as white, sticky masses on leaves, twigs, or fruit. With large concentrations of mealybugs, sticky honeydew will appear with a dark, sooty mold growth over it.

Feeding Habits and Damage: Adults and nymphs suck plant juices feeding on all parts of a plant—stems, leaves, and fruits. Excremental honeydew left by mealybugs supports the growth of sooty mold fungus.

Organic Control Calendar: Here is what you can do seasonally to control mealybugs: 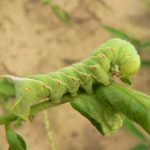 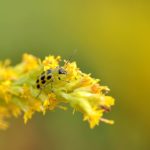