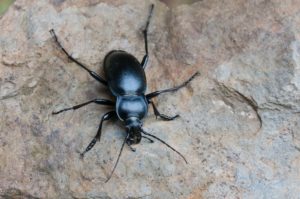 Ground beetles are not attracted to the garden by specific plants, but a diversity of perennial plants will give them places to hide and find food. Ground beetles feed at night and hide under boards, rocks, tree bark, and garden debris during the day. You can encourage ground beetles by providing shelter.

The ground beetle is a shiny hard-shelled insect about ⅛ to 1½ inches long. Most ground beetles are dark colored, black or bronze, but some are metallic green, blue, gold, or red. They have a narrow head with threadlike antennae and sometimes can be mistake for cockroaches. Larvae are dark brown or black grubs with 10 segments tapering toward the rear.