Planting vegetables in their right season will greatly enhance your harvest. Most vegetables belong to one of two seasonal groups: cool-season crops and warm-season crops.

Cool-season crops must mature while the weather is cool otherwise they will go to seed. That means they are usually planted at the end of the warm season or the start of the cool season. Warm-season crops must be planted and begin to grow after the last frost or freeze of winter, and they must mature soon enough that they can be harvested before the first frost of the next cool season.

Cool-season vegetables should be planted so that they mature either in the spring or early summer before the heat of summer or later in autumn as the weather begins to cool. Cool-weather vegetables require a minimum planting temperature of 40-50°F (5-10°C), and they grow best when the temperature highs are in the range of 70-75°F (21-24°C).Cool weather crops usually stop producing when daytime temperatures reach 80ºF (26°C). or higher.

Cool-season vegetables that can tolerate frost and or short freezes are classified as hardy and half-hardy according to their tolerance. Hardy vegetables can be planted two to four weeks before the last frost in spring. Their seeds will germinate in cold soil and their seedlings can endure short freezes

Half-hardy cool-weather vegetables are able to tolerate light freezes, just a few hours of freezing weather or frost. Half-hardy crops should be planted about the date of the last spring frost. If they are planted too soon, they will not survive extended freezing weather. 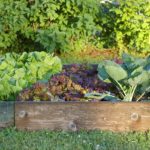 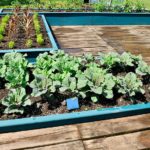