Leeks are generally classified according to their main season of maturity—in other words, how quickly a variety reaches harvest stage. Planting times roughly correspond to harvest times although there is some overlap.

When to sow leeks seeds

Where the growing season is long, leeks can be sown in the garden but is preferable to start leeks indoors or in a seedbed where the tiny seedlings do not have to compete with weeds.

Early varieties are best started indoors in late winter or early spring; they should be hardened off before transplanting to the garden.

Mid-season varieties can be started indoors or outdoors in early to mid-spring. If sown outdoors, protect them with cloches.

Late-season varieties can be started indoors or outdoors in late spring.

When to transplant leeks

Transplant leeks to the garden 10 to 15 weeks after sowing when they are about 8 inches (20cm) tall.

Leeks can be planted on the flat—flat soil, but they are most often planted in holes that allow for blanching of the stems.

Make a hole 6 to 8 inches (15-20cm) deep with a dibble. Place the leek in the hole and water. Allow earth to fall into the hole naturally over time; the soil will blanch the stem in due course.

An alternate method is to create a shallow V-shaped trench about 4 inches (10cm) wide at the bottom; plant the seedlings and then gradually fill the trench with soil to blanch the shafts.

Leeks can adapt to a wide range of soils but do best in humus-rich, well-drained soil. Leeks prefer full sun but will tolerate partial shade.

Begin to harvest leeks when they are useable in size. A layer of mulch will keep leeks in good condition if they are to remain in the garden for winter harvest.

How to Grow Leeks 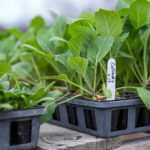