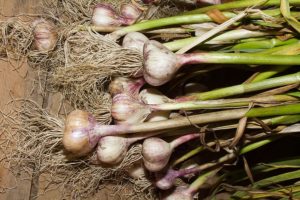 There are hundreds of named varieties of garlic, but all of them can be categorized into two major types: soft-necked and hard-necked.

The stalk that grows up from a garlic bulb is called a “neck.”

Soft-necked garlic is strong flavored and stores well because it has several protective outer layers of papery skin.

Hard-necked garlic is mild tasting and best used soon after harvest since it has only a few layers of papery skin and thus keeps poorly.

The garlic you are most likely to find at the market is soft-necked garlic simply because it keeps best.

But where you live may have a lot to do with the type of garlic that you are most familiar with and use.

Soft-necked garlic is grown most commonly in the United States—mainly California, Texas and Louisiana–and in France, Spain, Italy, and Mexico.

Hard-necked garlic is most commonly grown in Central Asia and Russia.

Garlic is thought to have originated in Central Asia thousands of years ago. All garlic today is cultivated; it does not grow wild. But hard-necked garlic varieties are believed to be closest to the original wild form.

Hard-neck refers to the woody flower stalk that grows through the center of the bulb. This stalk does not produce flowers but small bulbils resembling seed heads at the end of the stalk.

Because the hard stalk grows up through the middle of the bulb. Hard-neck garlics produce a few large cloves around the outside of the bulb.

Soft-neck garlic, by contrast, does not send up a woody stalk. Instead it sends up strapy leaves. The absence of a stalk growing from the center of the bulb allows several smaller cloves to grow at the center of each head and larger cloves on the outside layer. Because of the layers of cloves, soft-neck garlic is plump looking.

Soft-neck garlics also are referred to as braidable varieties because their soft-stems dry almost grass-like and can be tied or braided together into long chains.

Popular varieties of soft-neck garlic include ‘California Early’, a market cultivar with 10-12 plump, even-sized cloves; ‘Italian Purple’, which is large and mild flavored; ‘Clermont Ferrand’, from the Massif Central of France; and ‘Silverskin’, a large white-skinned garlic that is a culinary favorite.

Hard-neck bulbs form large outside cloves and no inner cloves. Hard-neck garlic has a mild taste and is easy to peel.

Popular varieties of hard-neck garlic include ‘German Red Garlic’ which has a bright purple bulb with lemon fleshed cloves; ‘Continental’ which is spicy and originated in Russia; and ‘Spanish Roja’ which is large, reddish skinned garlic with an intense fragrance and flavor.

Rocambole. Another well-known hard-neck garlic is rocambole. The woody stem of rocambole can curl to form a 360° coil. Rocambole is sometimes nicknamed “serpent garlic.”

(For the record, rocambole can also refer to another onion family plant, A. scorodoprasum. This plant can be used like garlic but ressembles more closely a leek, and is thus also known as “sand leek”.) 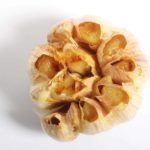 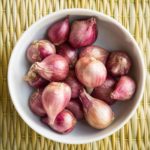