Peppers–sweet and hot–are native to the tropics. They require much the same cultural treatment as tomatoes, except that peppers are perhaps a bit more tender. The easiest way to start peppers is to buy transplants at the garden center. If you start peppers from seed outdoors, sow seeds in pots in mid-spring for transplant in early summer. If you start seed indoors for transplanting do so about eight weeks before the average night temperature is at least 55°F.

Here are a few tips to take into the pepper growing season:

• Planting. Plant peppers where they will succeed. Peppers want full sun and deep, sandy or gravelly loam–meaning rich and well drained. Add plenty of aged-compost and organic matter to planting beds in advance of transplanting peppers. A pH of 5.5 to 7.0 is optimal. Raised beds will give peppers the soil warmth they need–and black plastic sheeting or mulch will help warm the soil. Magnesium helps peppers develop fruits; work a dusting of Epsom salts or Dolomitic limestone into the bed just before planting. Side-dress peppers with compost when flowers appear and again three weeks later.

• Transplants. Plant transplants with strong stems and dark green leaves. Watch out for leggy or spindly plants; they may not have had enough light getting started. Avoid pepper starts with blossoms or fruit. Pepper seedlings need to conserve their strength while they develop roots. The root system of a pepper seedling is not strong enough to support flowers and fruit while it is getting started in life. When you buy starts at the garden center, look for plants with stout stems, dark green leaves, no flower or fruit, and no blemishes. These plants are the healthiest.

• Starter Feeding. Give peppers a good boost at planting time. At the bottom of the planting hole add a handful of compost along with a teaspoon of 5-10-10 (or like percentages) fertilizer mixed with some soil as a buffer between the new roots and fertilizer. Set peppers in a hole about six to eight inches deep and space plants about 15 inches apart–so that the leaves just touch at maturity.

• Watering. Water deeply to encourage deep root development. Too little water can result in bitter-tasting peppers. Peppers want even, moderate moisture around their roots. A gallon of water–about an inch–per plant once or twice a week applied slowly so that the moisture seeps to the roots is best. Avoid overhead watering especially when peppers are in bloom, overhead water will wash away pollen and any chance of fruiting. Be careful not to overwater’ overwatering will cut off the supply of oxygen to pepper roots.

• Mulching. Mulch with straw or grass clippings around plants. A thick mulch will stop weeds from growing and keep moisture in the soil when the weather gets hot. Use hay, straw, leaves, or grass clippings to mulch peppers. Organic mulches decompose and feed the soil and earth worms below. Make sure that the mulch you put down does not contain flowers or seed; no sense encouraging weed growth this season or next. If you put down a black plastic mulch to warm the soil early on, you can lift that once the soil has warmed and use the organic mulch in its place.

• Weeding. Keep weeds away from peppers. Weeds complete with peppers and other crops for the same space, water, and nutrients. Regular weeding will keep weeds from getting a foothold in the garden. Avoid damaging roots by gently hand-pulling weeds. Most young weed roots will not reach more than an inch deep into the soil. Avoid deep cultivation which can harm crop roots.

• Protection. Set plants out when the soil temperature is 60°F–70°F is better. Do not rush peppers into the garden until the soil is warm. They will not do well if the soil is cool. You can warm the garden bed by covering the ground with a black plastic mulch or sheeting for two weeks before transplanting. If the weather is not settled, peppers will benefit from the protection of floating row covers–this will keep the heat in and the bugs out. Keep peppers covered until daytime temperatures average in the mid-80°sF.

• Feeding. Feed peppers with manure or compost tea. Pale leaves and slow growth are signs your peppers need a boost. Peppers are heavy feeders so a side-dressing of manure or compost tea a few times during the growing season is a plus. Steep a sockful (an old gym sock will do) of compost or manure in a pail of water until the water turns the color of tea. Feed the plants by watering at the base of the stem. If brewing a manure tea is out of the question, side-dress with a teaspoon of commercial fertilizer, 5-10-10 sprinkled around the plant’s drip-line and scratched gently into the soil. The first side-dressing should come at blossom time, about a month after transplanting to the garden. Add a second side-dressing about a month after flowering when the first fruits have developed.

• Harvest. Harvest peppers at the height of maturity. Early in the season pick the first blossoms or set of fruits to encourage the plant to keep bearing and grow larger fruits later in the season. Most sweet and hot peppers require about 70 days from transplanting until the first fruits are ready. From the start of harvest, peppers can take another 3 to 4 weeks for reach full maturity–that is to turn their mature color–usually red, but sometimes yellow or orange. The hotter peppers can require anywhere from 90 to 200 frost free days to reach harvest. Keep in mind that the cooler your growing season, the more time must be added for peppers to mature.

• Storing. When frost threatens, pick all of the fruit or pull up the plants and hang them upside down in a dry, cool place until the fruits ripen. You can also clip peppers off the plant–leaving an inch of stem on each pepper–and string them together to make ristratas. Hang the ristrata in a dry place and allow the peppers to dry. If you live in a humid region, a better way to dry peppers is to place a single layer at the bottom of a grocery bag and clip the bag shut. The peppers will dry–and not be susceptible to mold–in about 10 days. 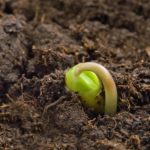 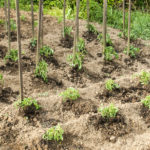