After the first frost of the year, the starch in the parsnip converts to sugar and that is when parsnip eating gets good.

The parsnip has a pleasantly sweet taste that combined with brown sugar, maple syrup, cream, apples or spices such as nutmeg, ginger, cinnamon or allspice, for instance, make it all the more appealing. And its sweetness offers a welcome contrast to sour, salty or bitter foods.

But that is not to say that the parsnip leans only to the sweet side; it can be chunked and added to beef stew or combined with potatoes for mashing. It can be paired with chervil, dill and parsley. It can be baked, boiled, braised, breaded, grilled, mashed, pureed, roasted, sautéed, or steamed.

If you’d like to get started serving parsnips, the easiest way is to simply cook them like you would carrots. If you want to get fancy, put them around a beef roast and let them cook in the meat juices. Then serve hot on a crisp fall day!

Choose. When choosing parsnip, look for small to medium sized roots that are not pitted. Size has nothing to do with how good a parsnip tastes—remember its age. You should avoid parsnips that are limp or shriveled or spotted.

Prepare. When you go to prepare your parsnip, trim off the ends and knobs and peel before cooking. (The outer layer of raw parsnip can be added to coleslaw.) If the core seems tough or stringy you can cut it out.

A half-cup of fresh sliced cooked parsnip contains 63 calories (a half-cup of raw sliced about 50 calories) and 15 carbohydrates.

While the parsnip is not wildly popular today, its culinary versatility made it once a staple at winter tables in colder climates particularly before the popularization of the potato.

The Romans liked parsnips and so did Europeans in medieval times. The parsnip came to America in the 1600s. It had one of its best mentions in the 1898 Boston Cooking-School Cook Book authored by Fanny Farmer. 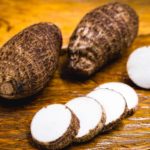