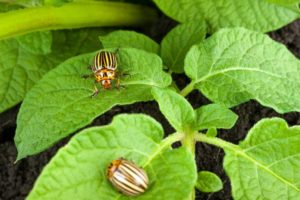 Adult Colorado potato beetles are oval with hard convex yellowish-white wing covers marked with lengthwise black stripes. Adults are about ⅓ inch long. Larvae are humpbacked grubs reddish to salmon-colored with black heads and two rows of black spots along both sides of the body.

Adults and grubs chew on the leaves of potato-family plants—potatoes, eggplants, tomatoes, and peppers. A heavy infestation can defoliate a plant.

Potato beetles emerge from the soil in spring at about the same time that potato shoots emerge. The beetles walk to host plants then climb up the stalks to feed. Adults mate and females lay rows of bright orange eggs on the undersides of leaves. 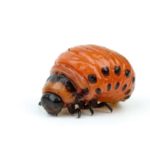 Humpbacked grubs hatch from eggs after 5 to 15 days, depending on how warm the weather is. They feed in groups at first then spread out to cover an entire plant. Larvae progress through four distinct growth stages (instars) over a 10-day period. About 13 days after hatching the prepupae drop to the soil and burrow to a depth of several inches, then pupate. The adults emerge in a few weeks to continue the life cycle, or, if the weather is chilly, delay emergence until spring.

There are one to three generations per year.

Potato beetles can be found throughout North America and Canada, except the South.

Target Plants: Eggplants, peppers, potatoes, and tomatoes (these are members of the nightshade family, also called the tomato family or potato family).

Feeding Habits and Damage: Adults and grubs feed on leaves; a heavy infestation can defoliate a plant.

Organic Controls: Mulch well with a 1-foot layer of clean hay or straw. Handpick eggs and crush them (eggs resemble ladybug eggs but are larger and more orange). Handpick larvae and drop them in soapy water.  Apply rotenone, spinosad, or neem as a last resort if the infestation is bad (these natural insecticides will also kill beneficial insects so apply in the evening when beneficial insects are less active).

Organic Control Calendar: Here is what you can do seasonally to control Colorado potato beetles: